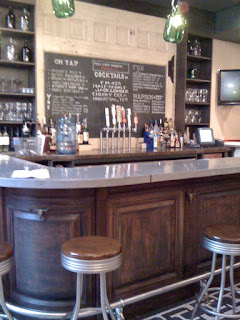 This past Saturday night I had a chance to get to the newly opened Percy Street Barbecue. I don't like to blog about restaurants within their first month of opening (just doesn't seem fair to the restaurant), but hey, I'm only in town about once a month. If you'd like another fluffier, and ever-so-well-written account, check out Rick Nichols' recent piece in the Inquirer.

The restaurant, a collaboration between Steven Cook and Michael Solomonov from Zahav, etc, and Erin O'Shea, formerly of Marigold Kitchen, certainly has received enough pre-opening press. Needless to say, hopes are high.

I'll add this caveat now. I am not an expert on BBQ. I'm certainly not a expert on Texas BBQ.

My brother and I decided upon a 1/2 lb. of Moist Brisket and 1/2 lb. of Spare Ribs with two sides, German Potato Salad and Green Beans. They recommend two sides per person, but I assure you, you'll do just fine with two. 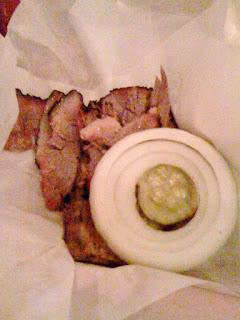 A few interesting details about Percy Street: you get a carafe of water on your table (I'm a big fan of this), after you order a busser attaches a paper towel holder to your table (good to have these at hand, however, if you use too many it becomes a mess, and a poor server has to remove your dirty paper towels from your table; a trash can might be necessary too), beer is served in mason jars, all of the meat is served in a plastic basket with butcher paper and the BBQ sauce is on the side for all you "my food can't touch other food" type people.

Now, about the food. Well, first of all, it arrived about 2 minutes after ordering. I was a little put off by this; at this rate turn time will be 45 min. per table. Second, the meat itself was cold. So were the sides (yes, cold potato salad is fine, but I thought the green beans could have been warm). I've been told that this is not how Texas BBQ should be. Feel free to correct me if I'm wrong about this.

The brisket had a fantastically simple smokey flavor. The spare ribs were also deliciously smokey, but not memorable. I'd probably stick to the brisket and try the pork belly next time. And the BBQ sauce was just fine for me, sweet and a little bit spicy.

For dessert, we decided on the Apple Crisp. It was nicely crisp on the top, and the filling was addictingly good. However, again, temperature was an issue. The center of the crisp was still cold (yes, maybe from the ice cream on top, but it was cold at the bottom too), while the rest of it was luke warm. I'm not going to say it, but we all know what kind of device produces this issue. 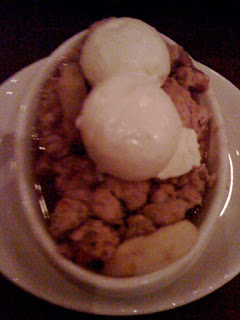 All in all, while everything was flavored very nicely, the meal suffered from temperature issues. I don't want to eat cold BBQ, and I don't want to eat a luke warm dessert. This all said, I'm hoping that these are opening issues that will be worked out eventually.

I figure if the flavor is there, the rest is just proper execution.

We were just in Texas Last month. We hit a few BBQ places in the Hill Country including Smitty's, Blacks, City Market, plus a few in other cities. I have never heard of cold BBQ meats! I was all excited to visit Percey wearing my Longhorn T-shirt but may be I should wait a bit longer until it has sorted out all the issues. BTW, I am disappointed that it does not carry Shiner Bock! What is Texas BBQ without Shiner Bock or sweet tea?

Thanks for your comment and for backing me up on the whole "BBQ meat shouldn't be cold" thing!

And I'm guessing the beer list was picked to pair with the BBQ, based on who did it. Guessing it wasn't created with nostalgia in mind :(

Fine review of PSB. My meat was cold, too! I know you liked the sauce, but as a Texan, I can assure you it is unlike any I've ever had. Too tomatoey, not sweet enough, too much spice.

Shiner Bock is not available in the Philly market.

I second that - the sauce is not good.