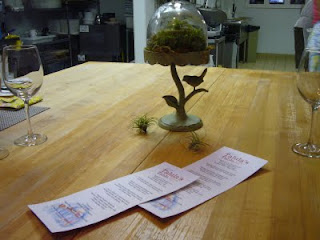 Last week I had the privilege of eating at Talula's Table in Kennett Square, PA. While I've never eaten at the actual "Farm Table," I have eaten at the "Kitchen Table" three times. With reservations booked a year out to the day at "The Toughest Table in America" to get a reservation at, I do consider myself pretty lucky.

Talula's Table seats 8-12 people at the Farm Table, and sometimes, a few guests are able to dine in the kitchen. Having worked in restaurants for the past 5 years, I'd much rather be in the kitchen at a place like this.

Owned by Aimee Olexy and Brian Sikora, this restaurant will always have a special place in my heart. I actually dined at their restaurant in Philly, Django, for my 19th birthday. This was way before I was a foodie, and I remember something about an organic game hen and local vegetables. The meal was delicious, but I didn't even know what I was partaking in. Looking back, I view it as my first foodie experience.

Anyway, enough reminiscing. Last week's dinner at Talula's was perhaps the best experience I've had to date. Interestingly, I have been one of the few quests to bring beer to dinner. I happen to know the other two groups; one of them being Tom Peters of Monk's, and the other, my friends Vicki and Scott.

I've always used Talula's as an excuse to break out good, rare beer, and attempt to pair it with delicious food. After the food pictures, I'll go over the beers. 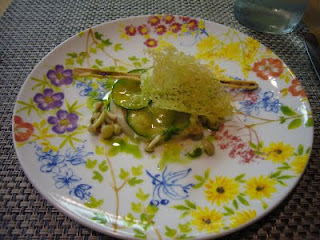 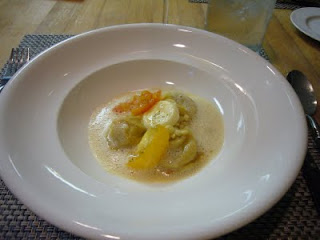 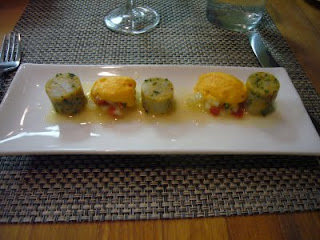 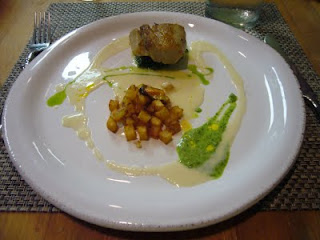 Creamy Risotto of Glennrose Farm Heritage Chicken with Fava Bean and Chicken Liver Mousse (forgot I was taking pictures, so this isn't the original plating...) 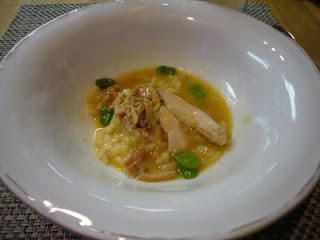 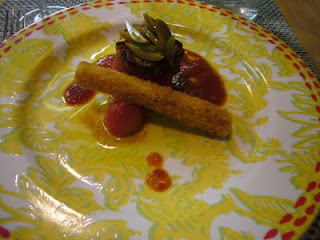 "Grassroots" A collection of local cheeses 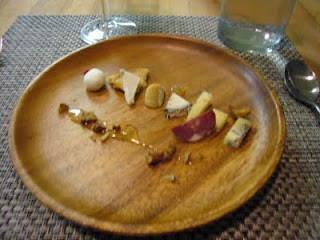 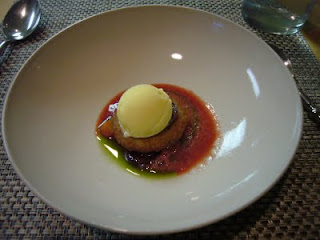 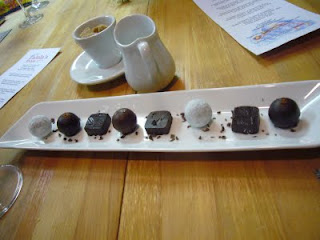 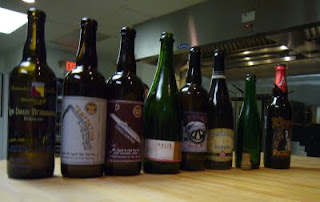 I have to thank my friend Ryan for contributing to our beer line up. Only someone with a few connections can bring Russian River Temptation to dinner.

Best Dish: Carpaccio of Zucchini and Button Mushrooms, Parmesan Lace, and Truffled White Bean Puree. Say what you will of truffle oil, and I'm certainly one to avoid it's overuse on every menu these days, but this dish was a cornucopia of flavor. The truffle oil enhanced every other ingredient on the plate perfectly.

Best Beer: New Belgium La Folie 2008. This beer is special: a sour brown ale, aged in French oak for one to three years before bottling. Without a doubt, it's one of my top 5 favorite beers. This one had mellowed nicely, but still retained the perfect amount of tartness and great acidity.

Best Pairing: Porcelet Ravioli, Sweet Corn Broth with Hand Stretched Mozzarella and Russian River Consecration. This one happened by accident. Basically, we drank the Russian River Temptation way too fast. I had meant to enjoy Temptation for two courses, but that didn't work out. I thought the Consecration, a strong dark ale aged for 6 months in Silver Oak Cabernet barrels with currants and brettanomyces, would be too much for the sweet corn broth and mozzarella. However, the delicious baby pork inside the ravioli was perfect with the dark beer. Additionally, the beer was actually light enough, and had enough acidity to not overtake the more delicate flavors of the dish.

Most Sour Beer: Hanssens Artisinal Cassis. I've been holding onto this beer since last October. I received it by chance, at Tria, after a Fermentation School class with Matthias Neidhart of B. United imports. I remember it being sour, but the additional 10 months aging in the bottle made it even more sour. It was perhaps the most sour beer I've ever had. It was out of control with wet horse blanket and musty basement flavors.

I have to thank Aimee and Bryan for allowing me to dine at their incredible restaurant. They are responsible for 3 of my top 10 dining experiences, lifetime.

Each time is different, and each time is special. And I'm especially thankful that I was able to get there one more time before my move. Not that I won't be back trying to make a reservation in December...
Posted by Femme Fermental at 12:54 PM