It took all of about 48 hours in Amherst, MA for me to crave a beer bar. We all have our favorite spots; what you might think of as "your" beer bar. In the Philly area, mine has certainly changed a few times over the past few years. But after just two days in Amherst, I already know where "my" beer bar is going to be: The Moan and Dove.

Located just south of downtown Amherst, it's a little bit out of the way of the college crowd. I had read about it on Beer Advocate, and had heard about it from Tom Peters.

Last night, it called to me. I just needed a good beer, in a good place. The music was right, the lighting was right (think a more manly Tria), it was clean/dirty enough, the bartender was friendly and the crowd was mellow.

Beer-wise, it has almost everything you need. The 20 taps and about 170 bottles are nicely dispersed between American craft brews and international selections. I say almost everything, because, well, Russian River doesn't find it's way to Massachusetts.

Perhaps the thing I'm most excited about is their "mug club." This isn't your traditional mug club. Basically, if you try every bottle they have available, you get a mug engraved with your name and the luxury of drinking every draft beer out of this 25oz mug. 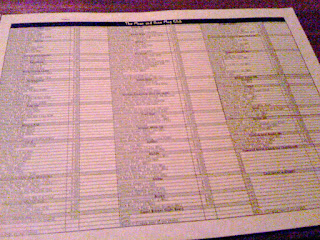 They keep track of all of the beers you've tried in a folder behind the bar. While not the most up to date system, it gives you something to read over. And just to keep it interesting, there are also fill-in-the-blank spaces for the bartender to add on things like, "warm and crappy beer of our choice."

Naturally, I had to sign up. After a few of my sour choices were out of stock, the bartender was kind enough to pull out a 2005 Cantillon Lou Pepe Gueuze from the back. Not a bad way to start. In fact, a gueuze was exactly what I needed to remind me of home.

I figured out that only 29 of the 170 bottles will be new to me. But that won't stop me (although having to drink 4 different Lindeman's might). I will be here for at least the next three years. So that's only about 55 beers a year. Everyone has to have goals.

Sounds like "Welcome home" is in order. Always good to find a bar where you feel comfortable. And it's good to know you're in good hands.

Thanks Lew! It'll do nicely for now. Interspersed with regional beer bar trips and visits back to Philly, of course. Cheers!

welcome to the area! the moan is "my" beer bar too. i live in agawam, but i work in amherst just down the street from the moan and i'm there often. maybe we'll run into each other there some time.

shoot me an email if you ever need good beer/food recommendations in the area. if you haven't already, be sure to go to sierra grille and the dirty truth in northampton.