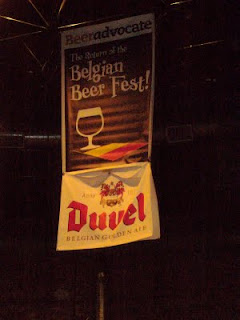 This past weekend, my best beer geek friend and I went to Beer Advocate's "Return of the Belgian Beer Fest!" Night of the Funk in Boston. My friend and I planned this trip back in July. It was only a 2 hour drive for me, but for her, it was a flight from DC. Yes, this how serious we are about beer. 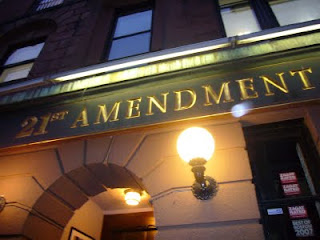 We started out at 21st Amendment. We had limited time before the event started, so we were stuck with something in the neighborhood of our hotel. I wanted to get to Deep Ellum or Publick House, but they just weren't close enough. 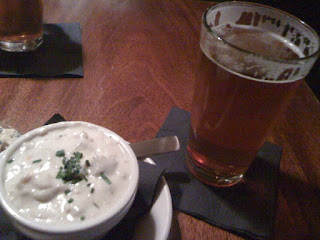 This bar was pretty amusing. It really can't be classified as a beer bar. The only craft beer on draft was Smuttynose Pumpkin Ale. So of course, we had that instead of 5 pony bottles of Coors Light for 5 dollars. We were there (fortunately, and unfortunately) during happy hour. The post-work business suit and Burberry clad crowd, crappy beers in hand, was all too entertaining. We were doing alright until they turned on the music and Michelle Branch's "Game of Love" came on.

Luckily, we were on our way out. The clam chowder was, by the way, spectacular. 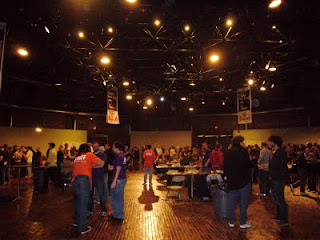 Soon we arrived in beer geek heaven. It was very much like all the beer events I've been to in this format: two ounce taster glass, and lines for beer. However, I have to give BA credit, it wasn't too crowded. We were able to get to all of the best beers. 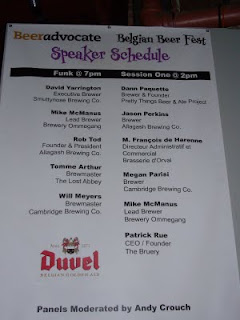 Perhaps the best and most geekiest part of the night (besides when we out beer geeked two guys while in line for the most delicious sugar coated waffles ever), was the "Night of the Funk Panel" with Tomme Arthur (The Lost Abbey), Mike McManus (Brewery Ommegang), Will Meyers (Cambridge Brewing Co.), David Yarrington (Smuttynose Brewing Co.) and my all-time favorite, I'm so in love with you, plaid-wearing Harry Potter look-a-like, Rob Tod (Allagash Brewing Co.).

For about an hour, the panelist took questions on brewing, marketing, and tasting funkified beers. The level of geekiness was fabulous. I enjoyed the home brewer question: "How can I barrel age when most wine barrels hold 50 gallons or more?" And the two part question that every brewer forgot the second part of: "When did you start brewing? And why did you start brewing?"

Quote of the night goes to Rob Tod, the man knows how to work a crowd: "It depends how you want to funk it up." However, Tomme Arthur came a close second: "I'm waiting for Bud to make Bud Lite Lime with Brett. So I can say I had Brett in a can last night." 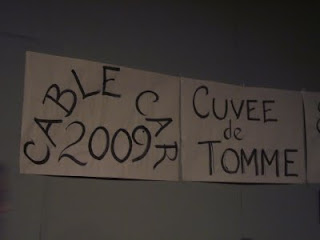 And yes, the beers were awesome. Sour beers are by far my favorite style of beer. Yes, I love my double IPAs, but there is something so complex and titillating about sour beers. Almost four years ago, when I had my first sour, Allagash Interlude, I was hooked.

The winner of the night, and not just because I love Rob Tod, was Allagash Vagabond. They are actually releasing it at their brewery on Monday. They made just 500 bottles. It's a beer aged for four years in the only barrels that moved with them into their new brewery. The nose was reminiscent of Allagash Curieux, with bourbon and port notes. The palate was winey with subtle red fruit flavors, a touch of tartness, and a smooth finish. It was classic Allagash. And, a new beer to add to my top 5.

All in all, an awesome night of beer. After this experience, I'd highly recommend any similar event done by BA in Boston. And I certainly know I'll be there again next year.
Posted by Femme Fermental at 7:45 PM

glad you had a good time! i was pouring for allagash at the fest last night. vagabond is delicious. and i agree, rob tod is super adorable and awesome! 8)

Whoa that's awesome. How'd you get that gig? I'd gladly pour for anyone there.

beeradvocate.com - they put out a call for volunteers several weeks in advance of each fest. everyone in a purple shirt at the fest was a beeradvocate volunteer.

I think Rob would be pleased to have a beer with you! I'm sending him your post!

Hey Felicia!
Hahaha, awww thanks so much!
I just can't hide my love for Rob! He's one adorable beer geek. :)
Hope all is well in Philly!