Last night I had a chance to get to Matt Levin's new restaurant, Adsum. While I don't like to go to restaurants in their first week, sometimes you have to take the days off and the opportunities as they come. Having heard so much buzz about the place, I had somewhat high expectations.

The menu itself is intriguing. At times the wording is reminiscent of Daniel Stern. "Green sauce." Uh, okay sure! Almost everything sounds good. So, we went with: 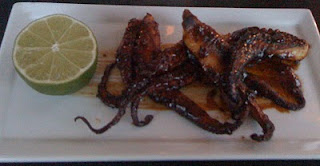 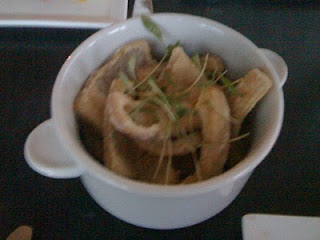 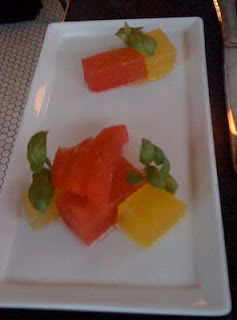 The octopus was well cooked. The sauce itself was more BBQ than black pepper caramel, but whatever. It was spicy and generally enjoyable.

The chicharrones were pretty ah-mazing! I think that they made the vinegar into a powder. They were certainly salty and delicious. I wanted to take an order home and eat them as a midnight snack.

The pickled watermelon, for 3 dollars, was also pretty good. The Kool-Aid flavor really came out in the few pieces of pickled rind that were on the plate. Additionally, the basil on the dish was really fresh and actually not overwhelming.

For our main course, we went with: 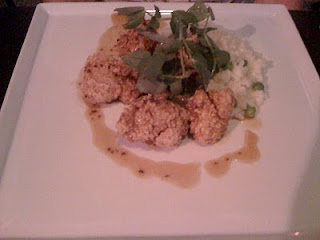 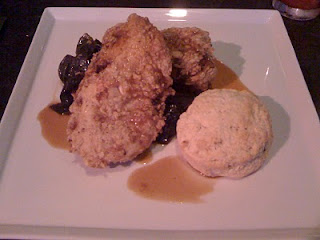 The sweetbreads were per-fect-ly cooked. The risotto, on the other hand, was not great. It was undersalted and too watery; as if they used water instead of stock. The peas were also unevenly cooked. But hey, that can happen with a new restaurant.

The chicken, while yes, kind of a lame choice on my part, was amazing! I have never had such tender and juicy, melt-in-your-mouth, chicken before. I don't know what they do to it, but it was perfect. The collard greens with the ham hocks were also enjoyable. Oh, and the biscuit you see on the plate: the most joyous gluten treat I have ever put in my mouth. Yet, fully admitting my gluten fetish, the biscuit was on the undercooked side. That didn't bother me, it was heaven.

For dessert we went with Ricotta Doughnuts and chocolate. I have to say, it was a good try. The outside was nicely crisp. Yet the inside was too soft. I'm not sure if it was undercooked, or simply the fact that it was ricotta. The chocolate sauce was also broken and did not stick to the doughnuts as you might like. Yet, it was still a nice dessert. 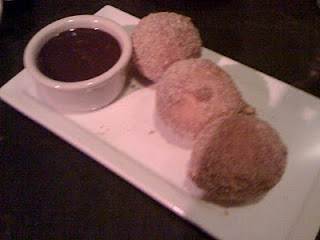 Beverage-wise, there is a nice list of cocktails. I had the "Unholy Water." I love ginger beer, so it was alright. I went with a cocktail because the beer menu was annoyingly marked up for import bottles. I know how much Petrus Pale Ale costs and I'm not about to pay more than I should for it. Perhaps they will re-think their list and/or the markup.

All in all though, this place has enormous potential. The menu is interesting, the proteins were solidly prepared, and the service was friendly. All of these small missteps can be attributed to the fact that Adsum just opened a week ago. I know that I will be back for a second go around. Hopefully it will be sooner rather than later.

Man... I love me some sweet breads!

You are invited to the Khyber Pass Pub preview party tonight from 6-8pm.