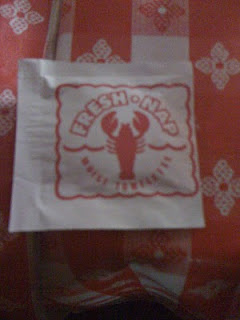 Alright, if for no other reason that to prove that I'm still alive, I need to make a blog post. And, I don't want to become a part of those statistics about defunct blogs. I was approaching the 6 month mark, and that is unacceptable. I will say that I have been training for a marathon for three months. This has seriously cut into my eating lifestyle.

Anyway, what has brought me back is the Lobster Roll. I have been in love with lobster since I was about 13. Prior to this point I only ate Oodles of Noodles, blue-box mac & cheese, and double-stuff Oreos. Ask my parents, they can attest to these atrocities. At some point I started to become a more adventurous eater, and lobster became a crucial part of the dinner of my dreams; something for special occasions only.

Typically, I eat my Lobster Rolls in Maine. (There's no way to say that without sounding like a snob.) I have, sort of, a problem. An addiction really. Moving to MA has been beneficial for me, if for no other reason, in that I am closer to Maine. When in Maine, I've been known to stop for Lobster Rolls as much as possible. At times, to the detriment of my ability to eat anything else. The "best Lobster Roll of my life" was consumed in July 2008 at Ebenezer's Pub in Lovell, ME. At a "world-famous" beer bar, this food find was unexpected. I also recommend the Lobster Shack at Two Lights in Cape Elizabeth, ME, just outside Portland. Between trips to Maine I fill my need for Lobster Rolls at a place that shall not be named.

Almost two weeks ago I had an amazing Lobster Roll. I was in Newport, RI for a football game. Ahem, no comment. But, the day before the game my Godfather (wow that's a pretty fun term to use for real) took my parents and I to the Brick Alley Pub & Restaurant. A Newport mainstay for 30 years, my Godfather has known the owners for quite sometime. 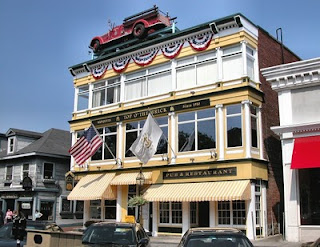 On a Friday lunch, during the off-season, this place was packed. People were on a wait for at least an hour. The inside of the place is charming; the walls are adorned with random and/or local memorabilia and antiques. And, as someone who has worked at a very, very clean restaurant in Philly, I have to say, this place was potentially cleaner. (That one's for you Johnny Tria)

But I digress. Naturally, I had the "Overstuffed Lobster Salad Roll." I was told that the crab cakes are great, but that's not for me. 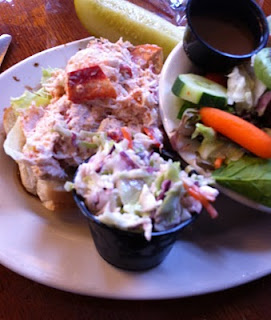 Mostly, I was shocked by the quantity of lobster. The mixture itself was pretty good; claw meat was interspersed with smaller pieces of shaved lobster, and there wasn't too much mayo. The style, admittedly, varied with my Maine mainstays; this Lobster Roll was larger and there was less discernible knuckle meat.

As a gluten-freak, I adore the Lobster Roll bun, or "New England-style hot dog bun," if you will. I saw a bag of these rolls at the football game and nearly lost my mind. Maybe I've been hiding under a rock, or shopping at Whole Foods too much, but this made my day. Yeah, I love Martin's potato rolls, but there's something special about a Lobster Roll bun toasted with butter.

And so, my Lobster Roll need was satisfied. As much as restaurants in the Mid-Atlantic attempt to emulate this lobster treat, it's never the same as what you can find up here. It's just a New England thing.