All beer geeks have a list of places they must visit. San Diego should be high on the list. I chose to run the San Diego Rock and Roll Marathon for a few reasons. My desire for good beer just happened to be one of those reasons. Unfortunately, the days before running a marathon aren’t the best to visit breweries and beer bars. I did the best that I could. In one day I visited Lost Abbey / Port Brewing, Stone, and Pizza Port (Solana Beach). Thankfully, I had a driver.

Lost Abbey has always been a sort of mecca for me. Due to a scheme that I should not detail on the interwebs, I was a member of the Lost Abbey Sinners and Saints Club a few years ago. I went to great lengths to attain their limited release beers. As a result, I received emails from Lost Abbey about pickup only bottle releases that seemed like cruel taunts. 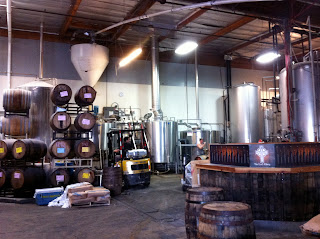 When I worked at Tria I was obsessed with knowing the town of every brewery. I always mentioned San Marcos in my description of Lost Abbey. Not that the town particularly matters, nor is San Marcos actually that notable, but I couldn’t believe that I was finally in San Marcos.

Out of all the breweries with tasting rooms that I have visited, Lost Abbey ranks high. The nearly seatless bar in the breweries’ warehouse space has an aura of relaxation. I’m sure the place can get crowded, but it feels expansive. If I lived nearby, I know that I would stop in for a few four-ounce tasters with some frequency.

The locals seemed to be devoid of stress; maybe that’s a southern California thing. People engaged me in causal conversation; this rarely happens on the east coast. While ESPN was on the TVs, not many patrons were particularly interested. In my five o’clock hour visit, on a Wednesday, I had finally made it to a place that I had long revered, and it was awesome.