In an effort to be a better blogger (read:more prolific), I may have to set my personal standards a bit lower. I can't write about every place I eat/drink with any serious amount of depth, but I can put it out there with highlights.

San Diego was awesome. People seemed genuinely friendly. Everyone had at least one dog. The weather was perfect: 65, no humidity, mostly sunny. Multiple Bikram studios. Tons of breweries. I'm not sure what's missing.

I did some food research and tried to visit as many places as I could without completely ruining myself for the marathon. Here are the highlights: 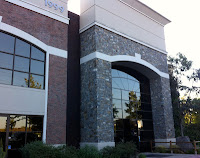 1. Stone Brewing Co. Escondido: The "Stone World Bistro and Gardens" building is giant, without signage, and absolutely gorgeous. There's a stream/pond that runs through the restaurant. Every material used is beautiful, weighty, and appropriate.

I was worried about the food, as many reviews complained that it is expensive and not worth it. Yes, the food is "expensive," but it was worth it. The hummus was fresh and the boar ribs were some of the most tender meat I've ever had. While the beer was great too, I would visit this restaurant just for the beautiful interior.

2. Pizza Port, Solana Beach: Alright, this place blew my mind. Both the food and their system is perfect. Start to finish, I have nothing bad to say about it. It was all very no hassle. 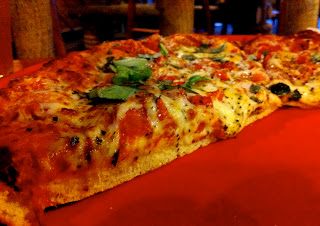 Additionally, this may be the best pizza I have ever had. Look at the crust. Look at it. I'm not a fan of thin-crust, so if that's your style, this isn't for you. I like dough (cooked or uncooked) and I like the crust to be substantial. It was perfect bread, perfectly cooked. Sauce and cheese were also in good proportion.

3. PrepKitchen, San Diego: One of the more challenging tasks of traveling with a conservative, yet tentatively adventurous, eater is finding at least one thing on the menu that they can order. After I find that one dish (usually a burger), I hope that the rest of the menu has some amount of creativity and appeal.

I chose PrepKitchen because it seemed to have a normal enough menu, but with good flavor combinations. I have a bit of a weakness for duck. Duck confit in June? I don't even care, I want it. The dish, with lentils, watercress, and apricot mostarda, was salty perfection. 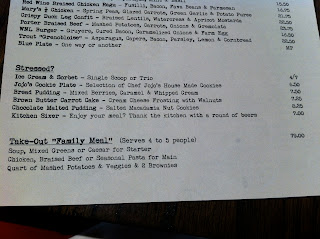 I also appreciate seeing new ideas at restaurants. Under the dessert category is a "Kitchen Sixer" for $7.00. Why not have someone else pay for the kitchen to drink? 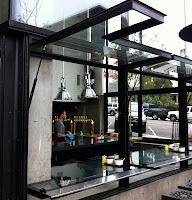 4. Underbelly, San Diego: I can't take credit for finding this one. The weekend before my trip the NYTimes did a San Diego beer scene write up. I'm always wary about following the NYTimes out of town recommendations. The restaurant itself is very pretty and modern. The wholly transparent indoor/outdoor bar aspect of its design doesn't exist anywhere in Philly (that I can think of). Another order at a register, take a number, and sit anywhere system. I'm a fan of simplicity. I ordered the meat ramen, instead of the basic version. I figured I needed protein for the marathon the next day. 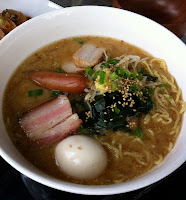 The soft-boiled egg was perfectly runny, the noodles were nice, the char-su belly, applewood smoked bacon, and Korobuta Sausage were flavorful, and the broth was okay.
I also appreciate a good restaurant mission statement. Underbelly may have the longest manifesto I have ever seen. But it is fantastic: "Everything will be ok." 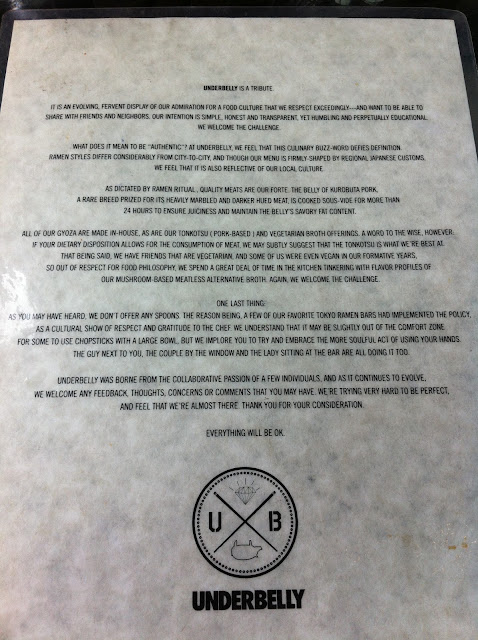 5. Whisknladle, La Jolla: Eating brunch after running a marathon is a necessity. Around mile 20 I start thinking about brunch. This is perhaps the one time that obsessing about brunch is not obnoxious. After burning 3381 calories, there is no guilt about eating as much as I want.

I wanted to see La Jolla, so Whisknladle (owned by PrepKitchen) seemed like a nice venture. The town is very California cute. Unfortunately, I was too sore to hobble around. Walking from the car to the restaurant was my limit. 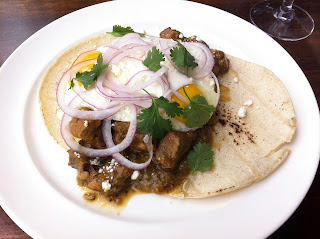 I chose the heartiest menu item: pork shoulder verde. Or, meat and eggs with tortillas. I really enjoyed this brunch, but I would have been happy with just about anything at that point.

Also of note, Whisknladle has a self-serve coffee setup and a "wake 'n 'bake" pastry bar with jam and spreads. I think this idea is genius. First, serving coffee is a pain. Allowing customers to get their own coffee avoids a whole bunch of annoying time-wasting serving activities. Second, when people go get the coffee, they see the scones, and will probably decide to have one. For $3.50 each, the pastries with homemade jams were worth it.

5. Rudy's Taco Shop, Solana Beach: Unfortunately, my trip didn't allow me to go crazy on cheap Mexican food. I made one attempt. The result was pretty mixed.

The carnitas was a winner. Unfortunately, the carne asada had a sort of barnyard-y, off flavor that was rather alarming. The quesadilla was the thinnest I've ever seen; not like any American version. The small amount of cheese and the flat-top grease on the outside of it was fantastic. Really.

I wish I could have tried more Mexican food in San Diego to make comparisons. I suppose I understand the appeal of cheap food. But, I still want the food to be better than hit or miss. 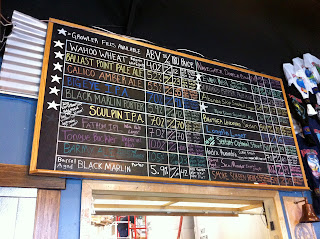 6. Ballast Point Brewing Co., San Diego: Stopping at Ballast Point was a must. There's nothing quite like drinking really hoppy beer in the middle of the afternoon with no food. After a few trips to the lone container of free pretzels, I start to feel bad about myself.

7. The Linkery, San Diego: In my search for crowd-pleasing restaurants, I was 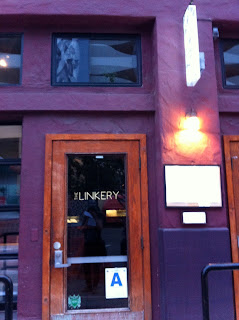 I decided to try this place because they make all of their own sausage. You can order the daily offerings of sausage alone or in various other forms of sandwiches and platters.

I tried the cochinita pibil and fresh polish as a picnic plate. Not only was the sausage delicious, but the bread and potato salad was amazing. I love bread and I most certainly love grilled bread. Furthermore, I have never seen such giant potato salad. I was worried about how consistently the potatoes would be cooked, but it didn't matter. The potato salad was perfect. 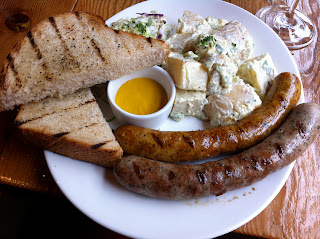 Interestingly, an 18% service charge is included with the bill. The menu suggests that if you would like to "express extra gratitude" that any cash left behind will be given to their charity of the month. I've never seen this idea before, but it sounds good.

All in all, San Diego was better than I imagined. I have added it to my list of terribly tempting west coast cities. This list seems to grow each time I go out there.
Posted by Femme Fermental at 3:03 PM