This past weekend I returned to Amherst for the first time in nine months. I spent a mere thirty-one hours in Western Mass. And yet, that was all the time I needed.

As I concluded when I moved back to Pennsylvania, Amherst is a very difficult place to live. My main reason for making the quick trip to Amherst was to visit my advisor. However, I also wanted to revisit the place where I lived for three years. I had some nagging doubts that I was too hard on Amherst. Maybe it wasn’t as terrible as I thought. Yet, within minutes of driving over the Connecticut River into Hadley and Amherst, I felt everything I once felt. The depression, boredom, claustrophobia, and sense of hopelessness were as palpable as they were nine months ago. 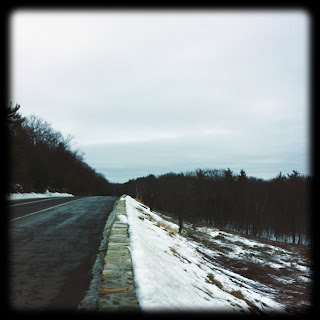 The snow-covered landscape and grey skies emphasized the monotony of winter. There were huge mounds of snow in parking lots and dirty, sandy snow on the sides of the road. The rain and sleet reminded me that the days of wintry perfection are few and far between. If I was looking to feel better about Amherst, it was not going to happen in February.

Some things did not move with me.

Posted by Femme Fermental at 4:18 PM

Glad you made the move to a place that's healthy for you.