A Day in Seattle 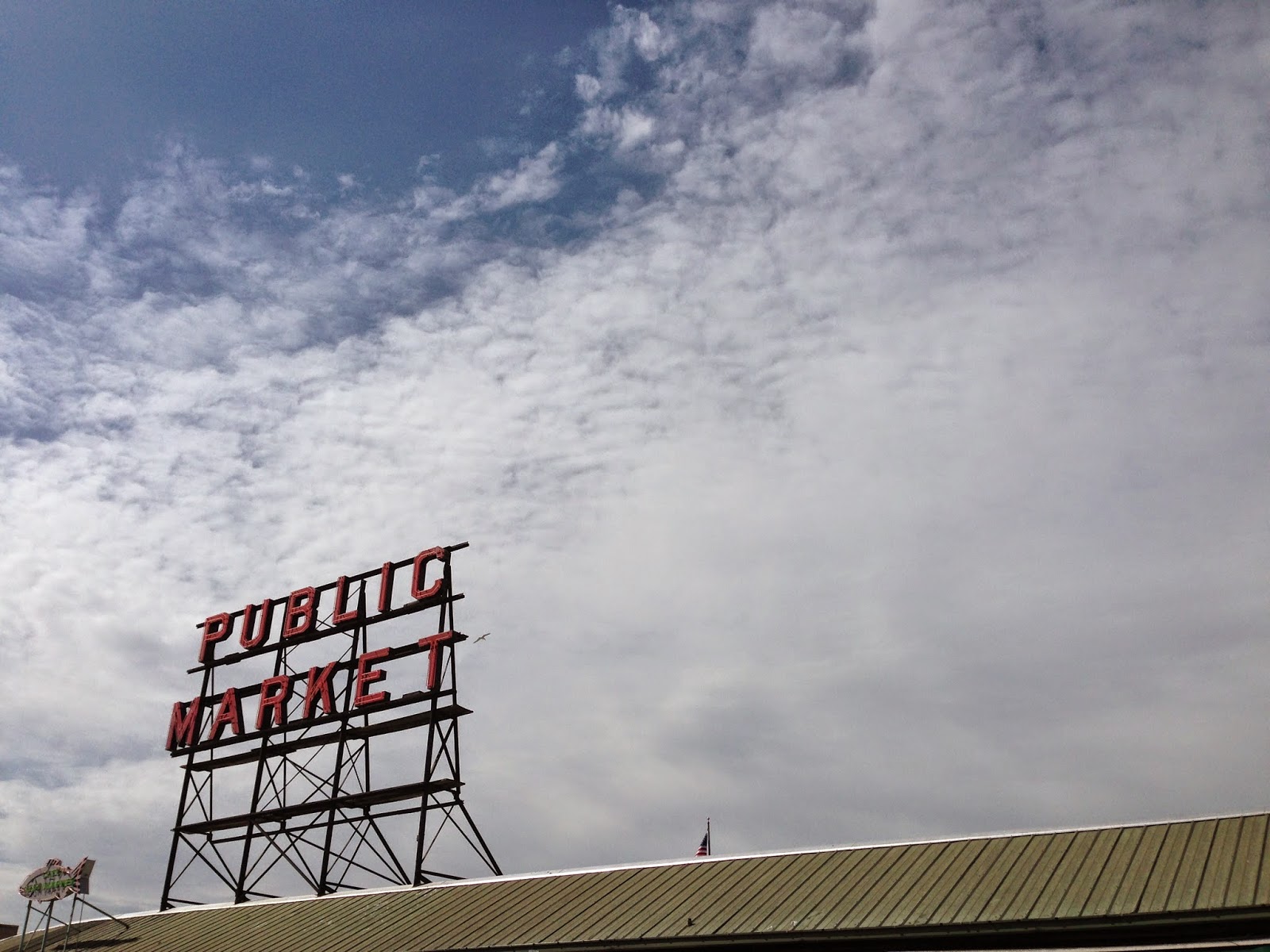 I visited Seattle briefly a few years ago. Instantly, I fell in love with the mountain-water-cityscape combination. My post-marathon visit to Seattle was also brief. I wanted to see and eat as much as possible. Since my mother hadn't been there before, we had a few touristy items to cross off the list. We went to Pike Place Market, the Seattle Central Public Library, Pioneer Square, Olympic Sculpture Park, and the Space Needle. We stayed not far from downtown in the Capitol Hill neighborhood. I really enjoyed the location and vibe of the area: a cleaner, prettier Northern Liberties/Fishtown combination.

In our short visit to Seattle, we did manage to eat at quite a few places. The highlights were perfect meals at Sitka & Spruce and Staple & Fancy Mercantile. I also managed to enjoy a brief interlude at Taylor Shellfish Farms. 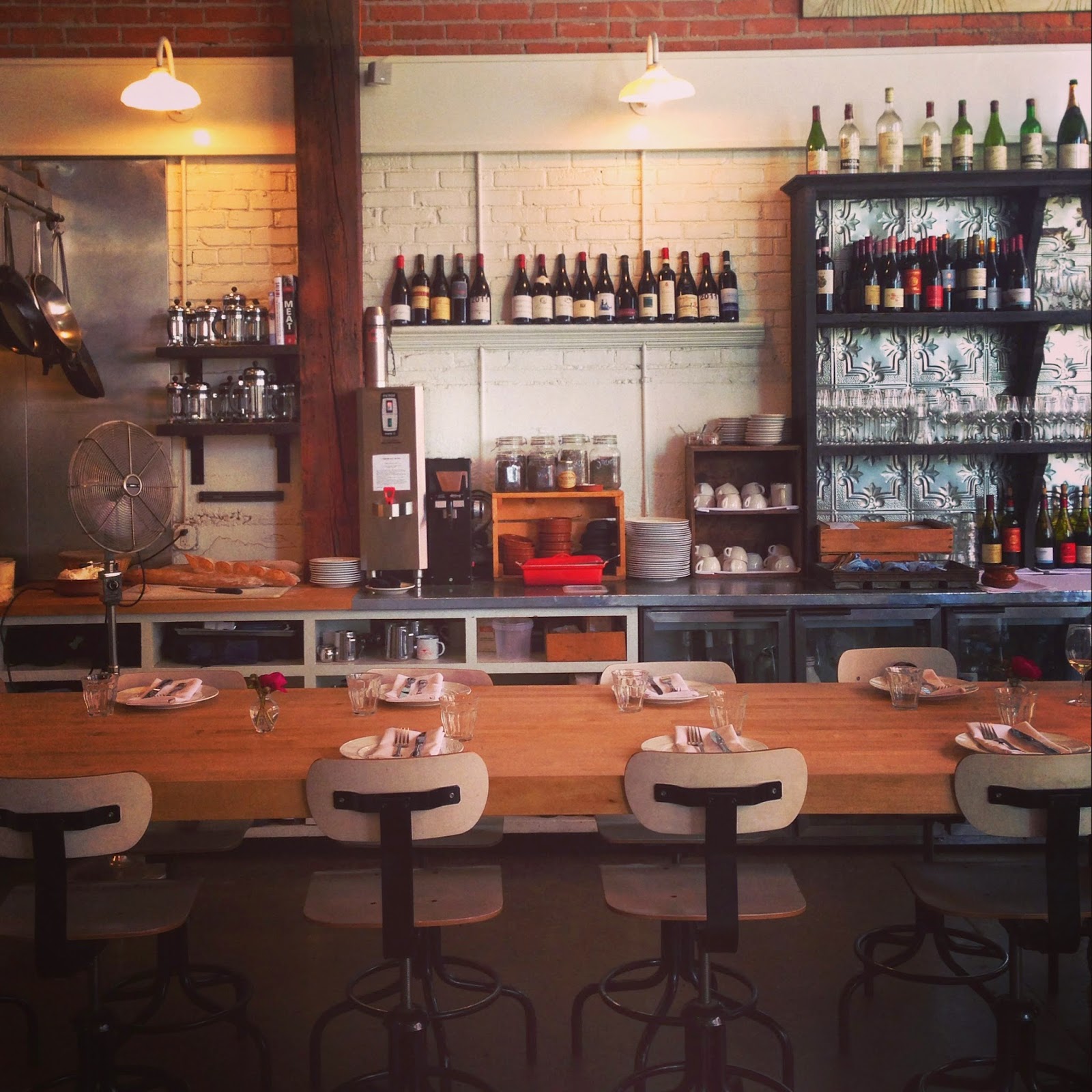 I had a fantastic experience at Sitka & Spruce from start to finish. I made the reservation over the phone a few weeks in advance. The person who answered the phone (also the person who waited on us) seemed genuinely excited that I had called and was visiting. I feel as though I rarely have a positive interaction when calling a restaurant.

Sitka & Spruce is a gorgeous space. The restaurant itself is tucked inside a multi-use space with a coffee shop, sandwich counter, flower shop, wine bar and home goods shop. It was slightly confusing, but the entire space is well curated.

As with any full day of eating, you need an early lunch. The bread from Columbia City Bakery was amazing; so was the butter. It is not a stretch to suggest that it was better than any baguette being made in the Philadelphia region. 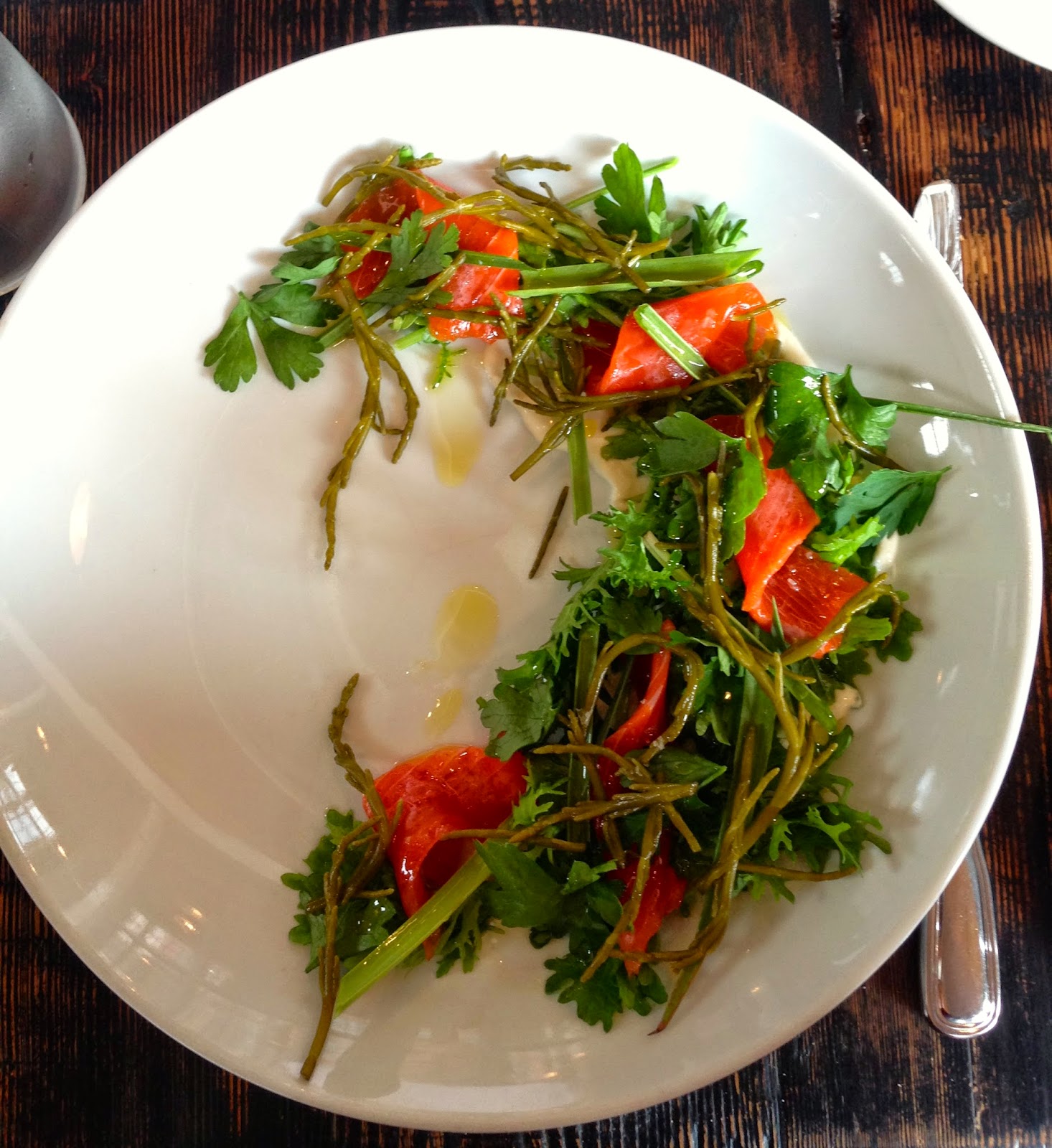 I started with a cup of broth made with pork, chicken, fish, and seaweed. A weird choice. I've been interested in broths since I ate at Eleven Madison Park more than a year ago. The whole duck for two begins with a cup of broth. It was the essence of duck. Fork does the same thing for their whole duck. Anyway, the broth was a flavorful, warming addition to the meal.

As an entree I had raw Quilleutte salmon, pickled seabeans, konbu and mizuna. The salmon was velvety, the pickled seabeans perfectly punctuated the dish, and the greens were a lovely complement. I wish I could have eaten more here, but this was only the beginning.

After a quick rest, we were back out and about. We stopped at Taylor Shellfish Farms with the hope of finding Dungeness crabs. I have a long family history of eating Dungeness crabs. They have achieved the aura of a higher power in my family: "Oh, you're going to Seattle/San Francisco, make sure you eat some Dungeness!" A family friend from Seattle visited us each summer. He packed Dungeness crabs in ice, took them on the plane, and prepared them for us the same day. As a little kid, I had only known the painstaking, yet rewarding, work required to enjoy Maryland crabs. My ten-year-old mind was blown away by Dungeness. So much meat for so little work? It didn't even make sense. 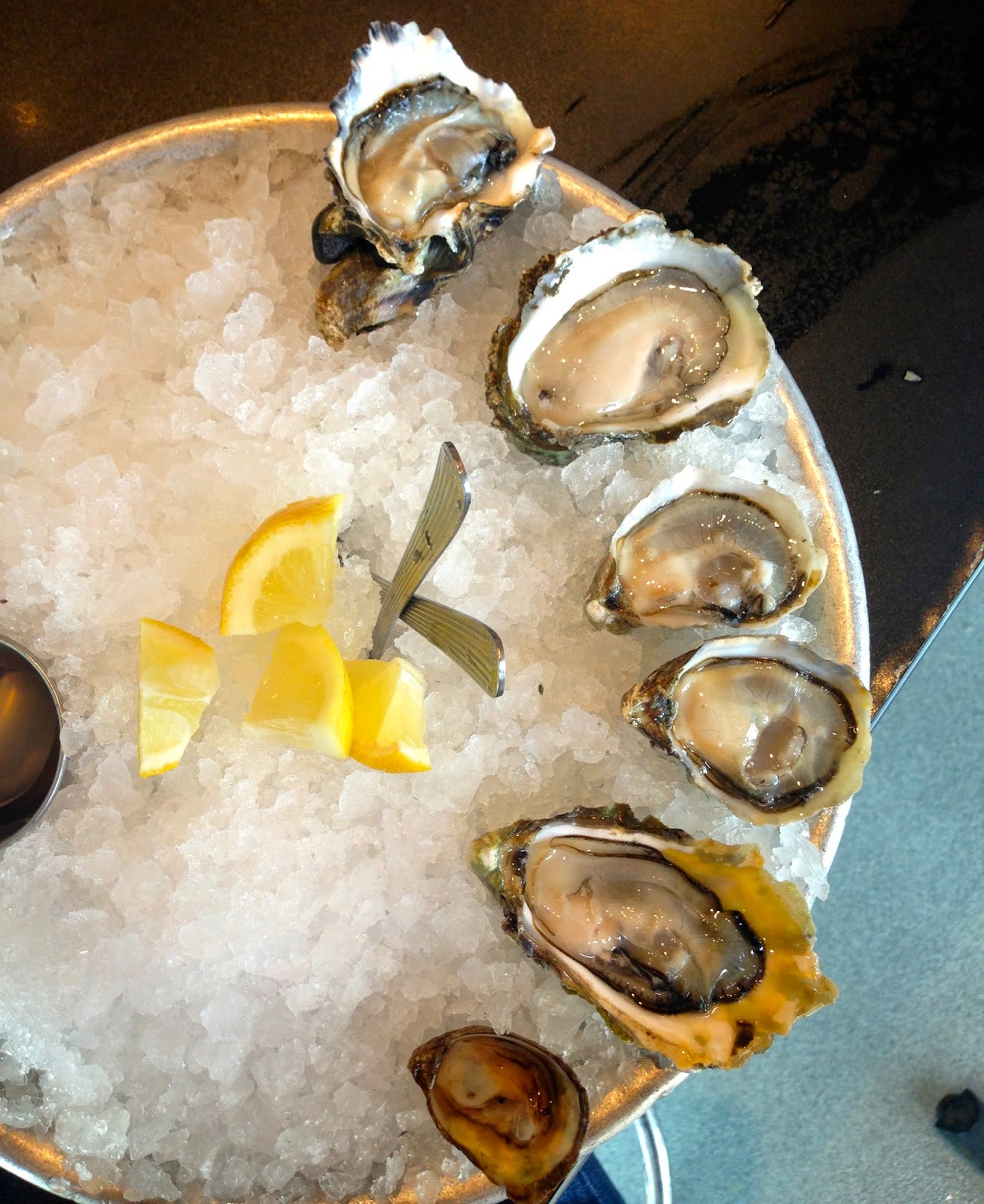 Alas, Taylor Shellfish Farms was out of them in the late-afternoon hour. The delivery truck had arrived, but it would take an hour to prep them. While my mother was sorely disappointed, I ordered half-dozen west coast oysters, a live spot prawn, and geoduck sashimi. In a day of eating, I barely even count raw seafood as eating. The oysters tasted far better than eating west coast oysters on the east coast, the spot prawn was pretty cool, as they break it apart (kill it) at the table, and the geoduck was texturally great, while approaching the sweetness of a raw scallop. 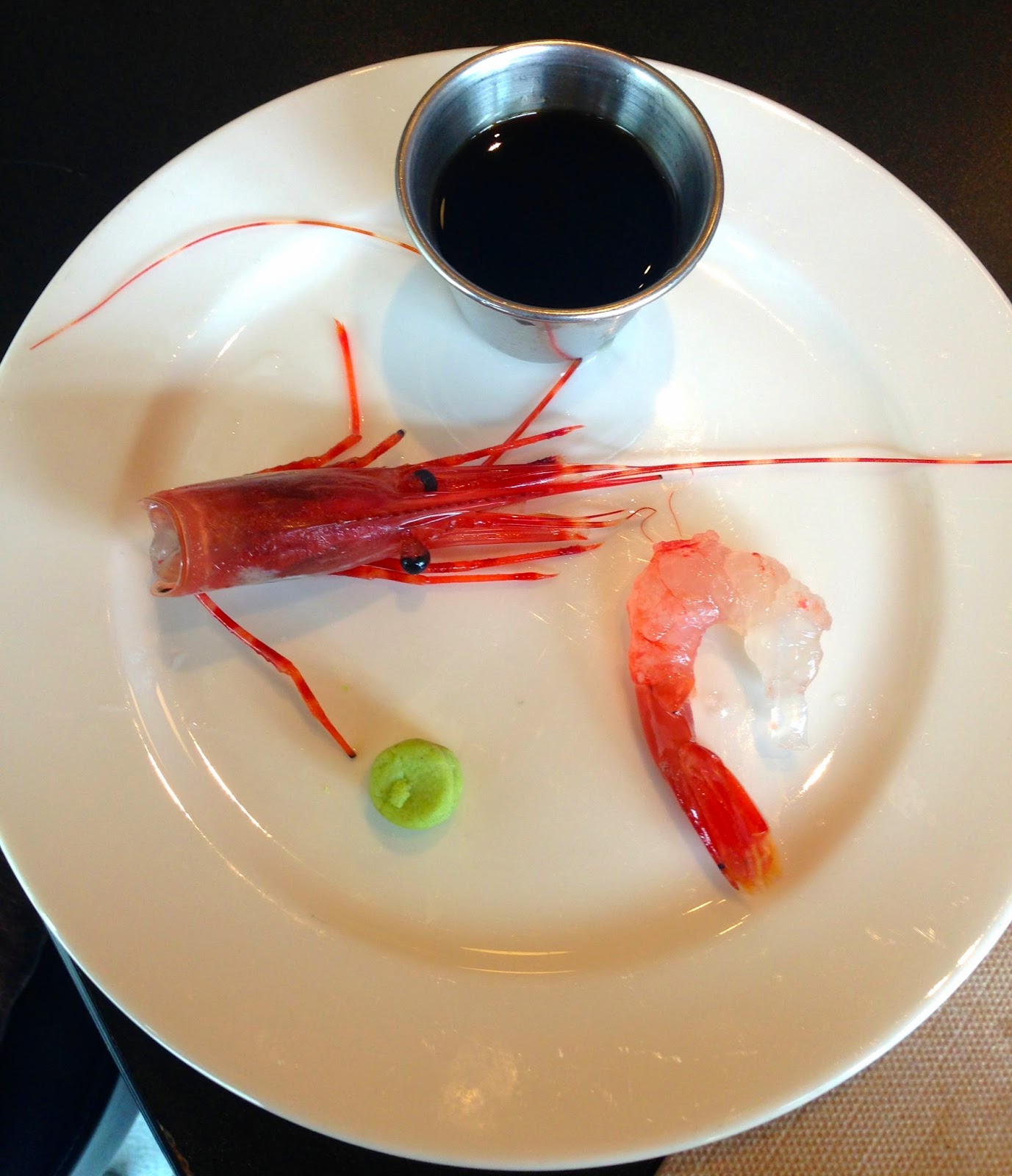 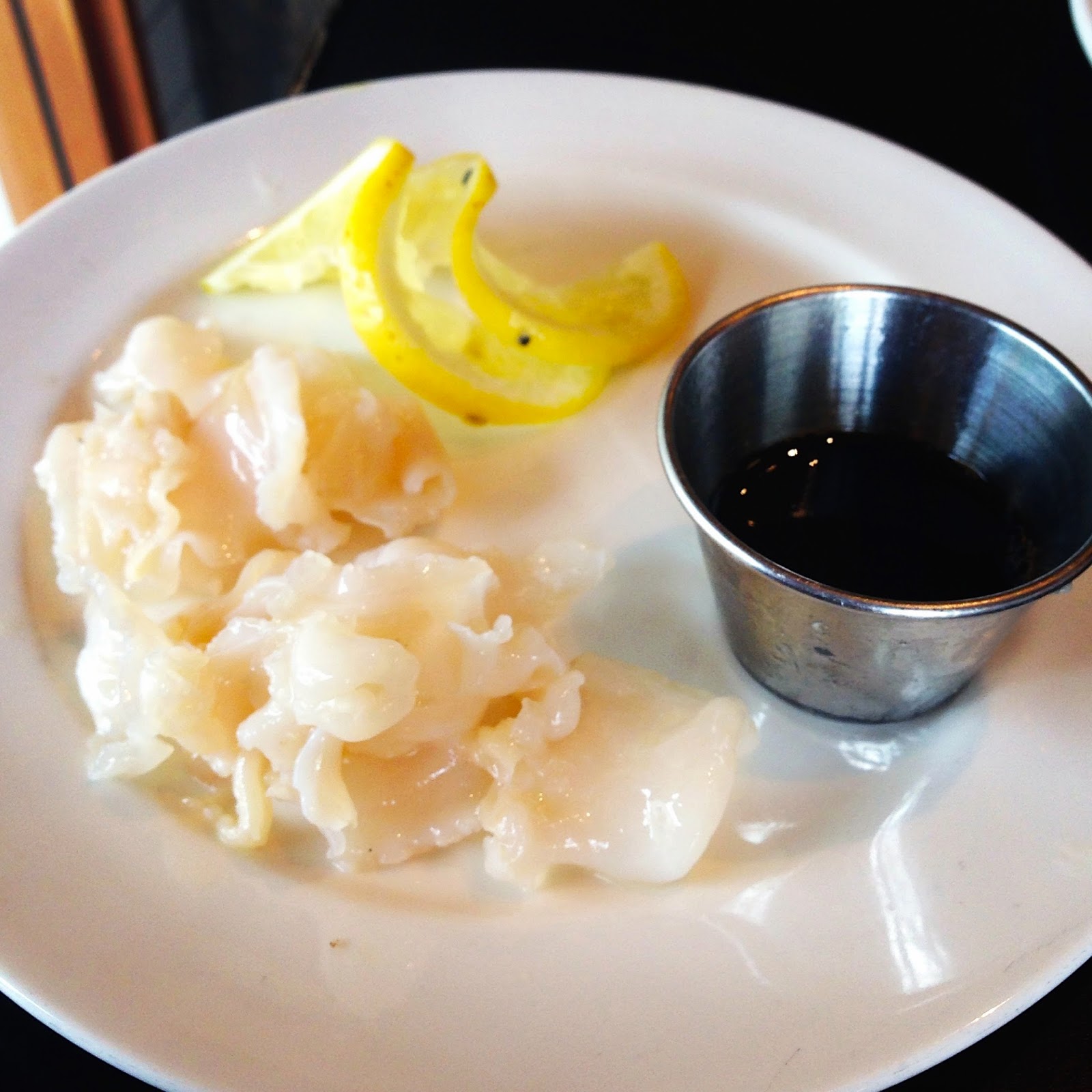 After a walk to the Sculpture Park we went to dinner at Staple & Fancy. I
chose this restaurant based on combination of Chowhound, Yelp, and the difficult task of finding restaurants that are open on Monday. Thankfully, my mother was up for the tasting menu. I had to do some double eating, but for the most part she ate everything. In fact, she said it was the best meal of her life, besides Zeppoli. 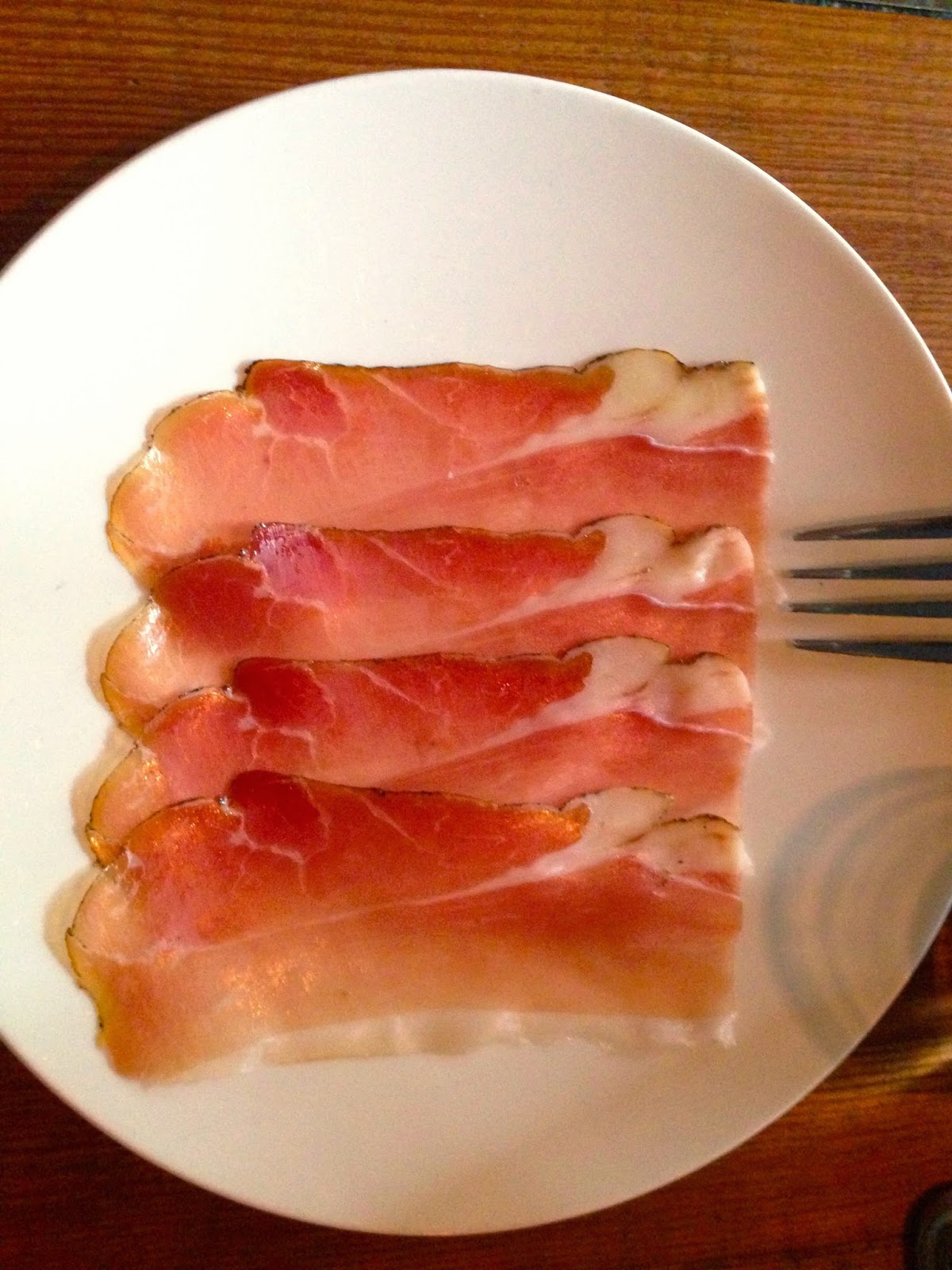 For $50 a person it was a steal. Between the quality and the quantity, I could not have been happier with the meal: salmon bruschetta, seared tuna, coppa, fried oysters, caesar salad, asparagus soup, buffalo mozzarella, rigatoni with guanciale, hanger steak, ricotta cheesecake. It was an onslaught of perfectly prepared food. I can't quite liken it to any restaurant in Philadelphia. Rather, I can't liken it to any restaurant in Philadelphia without writing something like, "what X tries to be...with less salt/cheese/butter." In fact, everything I ate on the west coast was less heavy handed than most of the food you find in Philly. After this brief stay in Seattle, we were off to Vancouver. 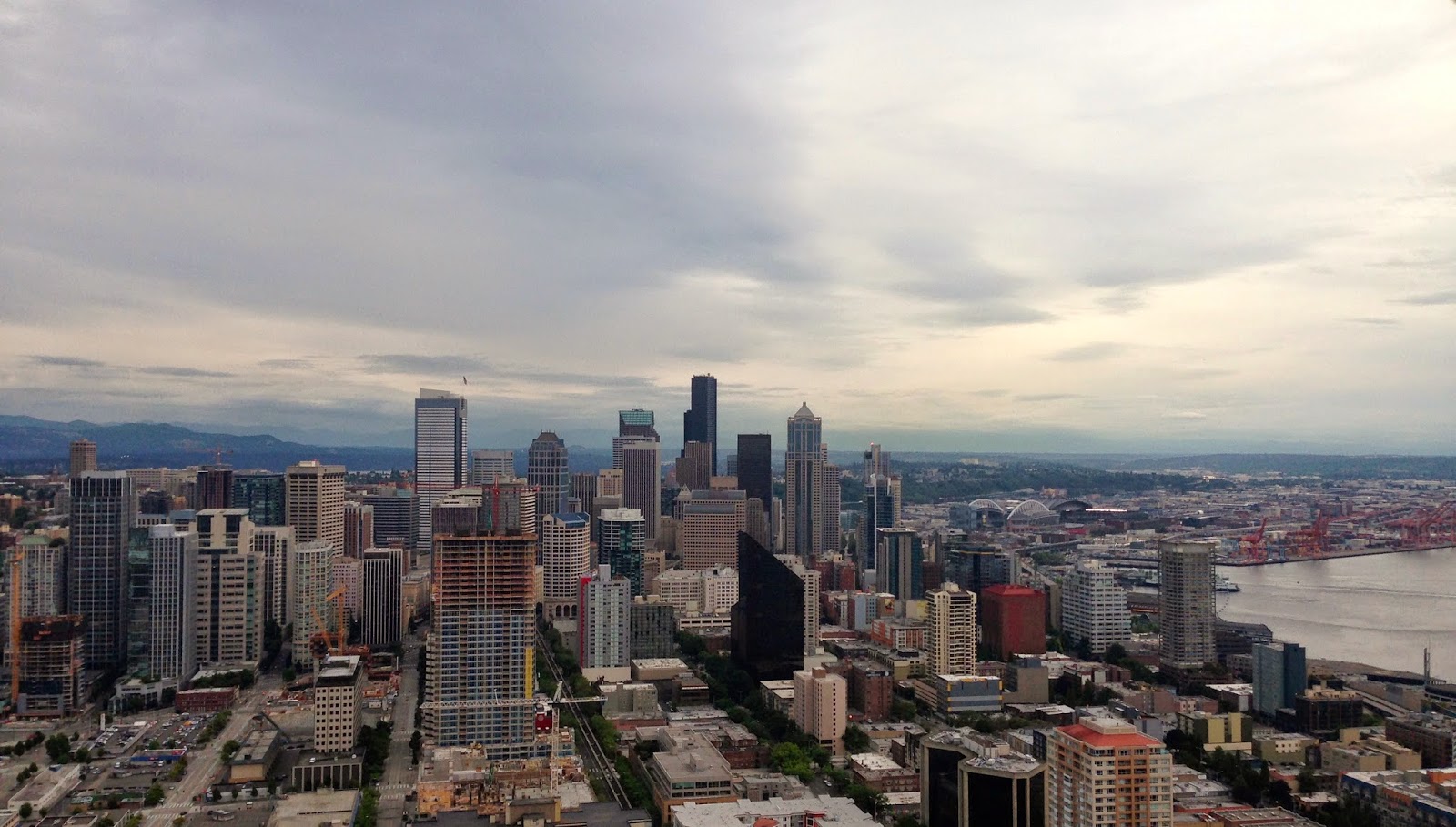 Posted by Femme Fermental at 12:30 PM