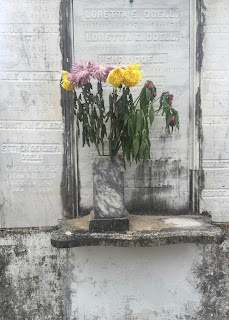 Over Labor Day weekend, I went to New Orleans with two friends. The list of cities I feel the need to visit, in the US, is dwindling. I’m down to Minneapolis, maybe Dallas/Houston, Miami, and apparently, Memphis. Then, I’m on to National Parks and other countries. I wanted to visit New Orleans for years. I didn’t want to visit alone. After a failed attempt to go to New Orleans last New Years, three busy people managed to plan a trip together. I was happy to travel with like-minded friends. We worked on a Google Doc of restaurants/bars for weeks. A few days before, we figured we should add in a few cultural events. Terms like “strategic reservations” were thrown about. An itinerary was typed up.

We found an AirBnb in the Bywater. The shotgun house was a fifteen-minute drive to downtown and walking distance to at least one bar. Upon arrival we went directly to St. Roch Market. I had been following this food hall on Instagram for months. There are about ten food vendors inside the gorgeous space. We had oysters and po’ boy sandwiches and cocktails. What is glorious about the market is that you can buy food from anywhere and sit anywhere, including the bar. Thus, you can drink a bit, go order whatever kind of food you feel like (tacos, pho, sandwiches, oysters), drink while you wait, and your food will come to you. It’s an ingenious plan I haven’t seen elsewhere. The system does seem to create more of a community feel in the space.

After checking into the AirBnb we walked over Bacchanal Wine. Again, this wine store/wine bar/cocktail bar/backyard music space was something I’ve never seen. The organization of the restaurant is so specific, yet relaxed at the same time. You buy a bottle of wine inside, take it with you, and sit wherever you like. There’s a cocktail bar upstairs. You can buy cheese and salami out of a cooler; they will plate it for you and bring it to your table. They also have a kitchen window where you can order hot food. There’s a backyard patio with various tables and live music. The whole concept seems too involved for Philadelphians. But, everything about it was easy. Nothing was stressful. Maybe it was something about the atmosphere of New Orleans. If I lived nearby, I would be a regular patron.

In our planning emails, we decided upon a few reservations. One was at John Besh’s Restaurant August. Unfortunately, we were rather underwhelmed by this very fancy, white-table cloth spot. We felt like we were rushed and a bit condescended to. Yes, we look young, but we are are serious about eating. The dishes were very acceptable, but not spectuar. Most were too salty. Somewhat disappointed, we walked to Sazerac Bar for after-dinner cocktails. This was the most time we spent downtown and the latest we were out and about. This fact might suggest that our priorities ran counter to the typical New Orleans visitor.

The next morning, I made it up and out for 8:00AM yoga. After, I grabbed coffee for all of us at Mammoth Espresso in the warehouse district. The owner and I had a nice chat; I learned the New Orleans saying that “anything worth doing is worth overdoing.” I learned that no one in New Orleans is roasting coffee and that third-wave coffee is still developing in the city. [Yes, I just used the term “third-wave” to describe a coffee renaissance and not feminism.] 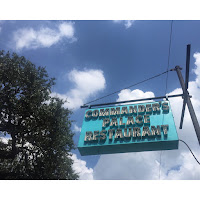 One of the other “strategic reservations” we made was Commander’s Palace for their Saturday jazz brunch. We were all looking for at least one traditional New Orleans experience. We were not disappointed. We ended up overly full and very impressed. The service, the food, the deep-dark French sauces, the bread, the garlic bread, the desserts, the everything. After lunch we walked around St. Lafayette cemetery across the street. Somehow, we continued on to the New Orleans Art Museum and sculpture garden. It’s a very nice, compact art museum. A life-sized, gilded log cabin proved surprising and useful (I showed my US history class photos).

We rallied for dinner at N7. This restaurant was recently named number 10 on Bon Appétit’s “America’s Best New Restaurants 2016” list. Tucked behind a wooden fence in the Bywater neighborhood, N7 seems to be more about kitsch and décor than food. My friends and I mused that Bon Appétit is interested in finding “things” that no one else is doing, as opposed to overall quality. N7 serves many items from cans on their “Can to Table” menu: habanero oysters, lobster rillettes, calamari in spicy ragout. These items are imported from abroad. This is all fine. Given the trend towards natural wines, I’m also not surprised to see this place on Bon Appétit’s list; their wine list is stellar. Dinner was totally serviceable. We were full from lunch, anyway. After dinner we went back to St. Roch Market for cocktails. I ended up buying a chicken sandwich from Good Bird that I didn’t need to eat. We grabbed cupcakes and few Radlers for dessert and turned in.

The next day, we were up for a quick breakfast before a cemetery tour. I wanted to visit Willa Jean for their pastries and cookies. I had an excellent smoked salmon sandwich on an everything croissant. Very good. My friend made the intelligent choice to order the cornbread. It was the best cornbread I’ve ever had. We also ordered pastries and chocolate chip cookies to go. After a (hot and humid) tour of St. Louis Cemetery No. 1, we drove out to the abandoned Six Flags New Orleans. The park never reopened after Katrina. I had seen photos of the inside on Instagram. I wanted to venture into the park, but it seemed that the only entrance had a security patrol. Simply driving by it was eerie enough. So, went home to nap. The thought of anything else to eat, or anything at all, was too much.

In the afternoon we ventured out for a late lunch. Again, I had been eyeing a butcher shop on Instagram for a while: Cochon Butcher. I had the best Cuban sandwich ever and lambrusco, while friends had a muffaletta and roast beef. After sandwiches we sought out music on Frenchman Street. The “music” part of New Orleans is real. This was most memorable. To walk down the street, listen to whatever is coming out of each bar, decide if you like it, and go in for a drink, is something I haven’t experienced anywhere else. I’m guessing that’s because it doesn’t exist elsewhere.

After music, we soldiered on for beignets. We weren’t going to miss them. I thought they were alright. I was, after all, the person who pushed for each of us to order our own bag. In ninety-degree weather, we sat on a bench by the Mississippi and ate fried doughnuts. I drank chicory coffee. We contemplated how much food we had consumed in a mere 48 hours. We contemplated never eating again. In fact, we were done for the day.

On Labor Day, I drove my friends to the airport for their flight. My flight was a few hours later, so I went to yoga (to feel better about my excessive eating). Then I found a coffee shop, Hivolt Coffee, in the lower garden district. I ordered something without meat: avocado toast. It was light and excellent. I read for a few hours, went to see some public art (a Noguchi sculpture and a Banksy), made a quick, final stop at Willa Jean to grab another chocolate chip cookie and a sandwich for the flight. After looking at the food options in the airport, I was very happy with my salami and cheese on baguette.

In the end, New Orleans was the unique, eerie, and delicious experience I thought it would be. New Orleans is an American city. I’m happy I went with friends. Despite that I travel alone quite a bit, I wouldn’t have felt entirely okay in New Orleans by myself. While I’m often happier to be alone, I enjoyed eating and hanging out with friends who also love food and drink as much as I do. 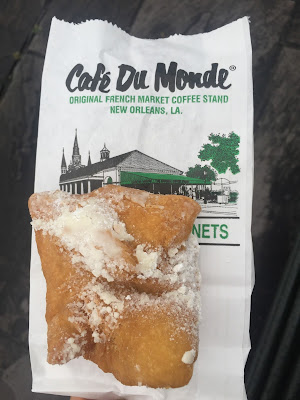 Posted by Femme Fermental at 10:54 AM