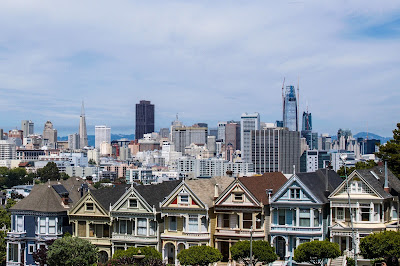 Outside of the Northeast corridor, I have visited San Francisco more than any other city. In May, I made a fifth trip to my favorite city. I ventured across the country at 19, 27, 30, 32, and 33. As I’ve written before, on this very blog, I fell in love at first sight. I can’t even recall if the trip was my idea, but if feels as though it wasn’t: a drive up the PCH from Los Angeles to San Francisco, with a night in Monterey. A drive followed by all the cliché, touristy requirements that a 19-year-old and her college boyfriend would enjoy. To a degree, I’m delighted that trip freed me from ever having do those things again. 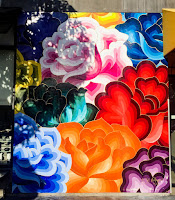 Now, my trips to SF are loose and meandering. I stay in the Mission because it’s self-contained, has everything I need, and is accessible by BART. As always, I ate more food in a week than I do in a month. Yoga, coffee, pastry, walk, lunch, walk, coffee, dinner, walk, bar. An embarrassment of riches.

There was a slight focus on pastries. I skip croissants anywhere else in the US. Sure, that seems extreme, but I am that exacting. I ate pastries from Tartine, Craftsman and Wolves, and B. Patisserie. Each one reminded me to save myself for the best and eschew laminated pastry elsewhere.

As far as meals, I ate breakfast at Tartine Manufactory, lunch at Hong Kong Lounge II, Akiko’s Restaurant, and Boulettes Larder, and dinner at 20 Spot and Flour + Water. I had coffee at Four Barrel, Blue Bottle, The Mill, and Verve. Also, cheap eats tacos at Taqueria Los Coyotes, papusas at Panchita’s Restaurant No. 2, and sausage at Rosamunde Sausage Grill. Beers at Monk’s Kettle, Zeitgeist, and Toronado. 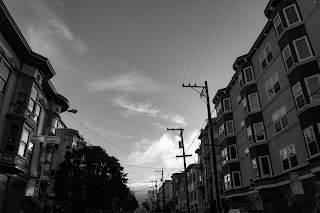 Perhaps the standout, beyond Tartine’s coddled eggs, duck jowl at dim sum, and Flour + Water’s pastas, was lunch at Akiko’s. I had no real reason to consume an omakase lunch on my last day in town. But, sometimes I can’t reason with my logical self. I could have chosen cheaper sushi, but I did not. Sometimes the shiny object wins. I sat at the counter and enjoyed single-piece-by-single-piece of sushi prepared for me. I did so, as best I could, while ignoring the loud and rather unapologetically wretched conversation had by three middle-aged men out for a boozy lunch. Given that the restaurant is in the financial district, I shouldn't have been surprised.

Beyond food, I went to the SFMOMA. It’s been under construction many of the times I visited. The space and size of the museum rivals the MoMA. Boxy and cavernous, beyond the featured exhibit, the galleries were sparsely attended. The “Matisse and Diebenkorn” exhibit was packed in a way I haven’t experienced since Georgia O’Keeffe at the Tate last summer. Really, zero elbow room to view the work. I move through those situations quickly. I also went to the de Young Museum again. I like city view from the tower and the “Summer of Love” exhibit wasn’t bad. Finally, I stopped in Grace Cathedral to see Keith Haring’s Last work: an altar piece.

With plenty of time to think and walk, I tried to reflect upon, once again, why I’m drawn to the city. Recently, I read Joan Didion’s new and short, South and West. California is her familiar, her childhood: “Part of it is simply what looks right to the eye, sounds right to the ear. I am at home in the West. The hills of the coastal ranges look ‘right’ to me, the particular flat expanse of the Central Valley comforts my eye. The place names have the ring of real places to me. I can pronounce the names of the rivers, and recognize the common trees and snakes. I am easy here in a way that I am not easy in other places.”[1] Having grown up on the East Coast, well acquainted with those place names and names of rivers, I have no rightful, experiential claim to the West. 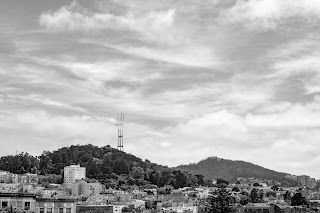 But, I have always felt at home there, be it SF, Seattle, Portland, even, to a degree, Los Angeles and San Diego. Similar to Didion, I feel easy out West, in ways that I do not in the well-trod geographical regions of my life. Perhaps it’s the lack of attachment that frees me. There’s chance and opportunity in a place not weighed down by the psychological associations of childhood, adolescence, and early adulthood.

But maybe it’s something else. Maybe there’s an attitude and a life and a relief that is unique to the West. Cleary, I’m still in pursuit of something.

Posted by Femme Fermental at 7:36 AM