I am susceptible to obsession. As I’ve mentioned before, my focus is more often on ideas, rather than people or objects. I learned about Art Basel a few years ago. I decided that I had to attend the original Art Basel, not Art Basel in Miami Beach or Hong Kong.

On January 21st of this year, the day after a particularly difficult day and birthday, I booked a flight to Zürich for Art Basel, in June. I was worried about travelling alone, in Europe. I’ve been all over the US by myself, but I wasn’t sure how I’d feel abroad, solo. These fears and anxieties were unfounded. I over research everything in my life, plan beyond the necessary level, and triple-check all plans. Those who know and understand me have learned to allow me to plan almost everything when we’re together. Sure, it’s about control, but it’s also about having incredibly high standards and wanting everything I do, see, or eat, to be the best. I also enjoy the research; the process is, more or less, my real job.

Upon arrival in Zürich, I took the train to Geneva. After a few hours by myself on the train and checking into an Airbnb, I knew I wanted to stay longer. Switzerland was comfortable, on-time, and seeping with a pleasant standoffishness. The trip was planned for eight days. I extended the trip to two weeks by adding a few more cities in Switzerland and a foray into Italy.

Geneva was as quiet as I had heard. I went to two museums, walked to the UN and a botanical garden, meandered through a Saturday flea market, and read at a coffee shop. Both art museums were small and focused on contemporary art: Centre D’Art Contemporain Geneve and MAMCO Geneve. I was somewhat jetlagged for both museums; perhaps that’s the correct way to take in contemporary installations.

From Geneva, I took the train to Basel for the four days of Art Basel. There are many
aspects to the art fair. There’s a section for larger installations/sculpture, two floors of gallery booths, installations throughout the town center in various buildings or public spaces, a night of performance art, panel discussions, and film screenings. Four days are necessary to avoid art fatigue.

Also, there are art museums in Basel and nearby that require a visit. I took my time through Art Basel, only a few hours at a time. I went back each day to see things I had missed, or pieces I had rushed by because of the crowds. I revisited my favorite installation three times: a 53-minute, three-channel HD color film by John Akomfrah, “The Airport.” The film is an eerie, Kubrick-esque elliptical narrative of anachronistic individuals, filmed in Athens and Southern Greece. After my first Art Basel experience, I would certainly go again, as it’s never the same.

Aside from Art Basel, I took the tram to Germany to see the Vitra Design Campus and Museum. I happened into a two-hour architecture tour. The campus is intentionally considered, with buildings by Jean Prouvé, Frank Gehry, Buckminster Fuller, and Zaha Hadid.  Also, I went to Fondation Beyeler, an art museum that’s a short tram ride northeast of Basel, and the Kunstmuseum Basel. Both of these museums are small, but with pieces I hadn’t seen elsewhere by Warhol, Rauschenberg, and Holzer.

From Basel, I took the train to Zürich. Overall, Zürich was my favorite city in Switzerland. It seems the most international and happening. I ate authentic Swiss food at Zeughauskeller (sliced veal in a mushroom cream sauce with rösti), chatted with two half-American bartenders at a hotel bar, saw a Judd exhibit at a gallery, and visited the Kunsthaus Zürich. I also made a pilgrimage to the closed-on-the-day-I-was-there, Pavillon Le Corbusier.

After Zürich, I went to Lucerne for one night. I spent the afternoon sitting by the lake, drinking beer, and reading. I caught a lovely sunset, climbed the tower of the church on the hill overlooking town, and had more drinks at a rooftop bar. In the morning, I found a quiet breakfast at Mill’Feuille and took the train south to Lugano.

I spent one night Lugano: a very Italian, but still Swiss city, one lake over from Como. I took a cog railway up San Salvatore, ate a perfectly northern Italian dinner, and walked around the lake. Lugano was instantly less organized than the rest of Switzerland. The stereotypical Italian influence was evident upon arrival. No trams, but rather busses, construction, and confusion.

The next day I took the train to Milan: the only major city in Italy I hadn’t visited on my only trip to the continent, in 2005. I’ve looked at flights to Milan over the years, in an obsessive way. People don’t speak entirely fondly of Milan, as they do about Rome, Venice, or Florence, and so, of course, I wanted to visit. 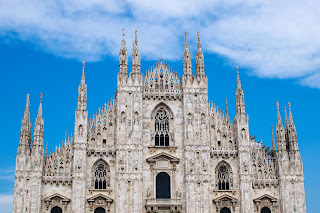 I loved Milan. I ate some of the best food I’ve had, anywhere: two meals at small trattorias, Trippa and Ratanà. I found a great coffee shop, Pavè, and went every day. I ate pizza twice; I did the best I could for pizza in the north. I ate gelato once. I took the subway around the city, walked the neighborhoods, took pictures, drank coffee, and read books. A recurring theme.

I spent six weeks in Italy, one summer, when I was twenty-one. To say that the entire country, culture, and general European sensibility was lost on me, would be an understatement. I didn’t do the typical American student thing—be drunk and loud—rather I spent the time in a manner not unfamiliar to me: depression and anxiety. I went with the wrong people; I was the wrong person; I didn’t want to go.

Perhaps waiting twelve years to revisit was wise. After this experience, I’ll try to spend two week in Europe, by myself, every summer to cover the ground I “should” have, with friends and a backpack, years ago. But this solo journey fits me. I’ve never been one for the expected, required, or predicted. The freedom of thought and time, spent by myself, was unlike anything I’ve experienced. I didn’t have to speak to anyone; I didn’t have to perform. I found a feeling and way of being that I can’t let myself forget.

Posted by Femme Fermental at 8:18 PM