Tuesday night I was lucky enough to attend Tria Fermentation School's class with Matthias Neidhart of B. United International Importers. We all have Matthias to thank for importing some of our most favorite beers from De Dolle Brouwers, Hanssens, Brasserie La Rulles, Brouwerij De Regenboog, J.W. Lees, Hitachino, and many others.

The class was truly a beer geek's winter dream. Often all we beer geeks want when we go out is to sample one beer we've never had, just one. This class provided us with eight in one evening. (Going out on a limb here to say we've all had Schneider Weisse and Schneider Aventinus) The remaining eight beers are impossible to purchase in PA. 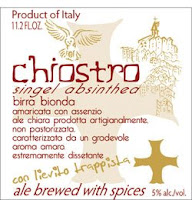 Brewed with pilsner malt, wheat malt, rye malt, Trappiste yeast, Hallertauer hops and absinthe leaves and flowers (added to the brewkettle), this beer is light, fruity and mild at 5% ABV. An herbal nose hints at the wormwood, but beyond that, it was unnoticeable.

Matthias is a big fan of the "beer renaissance" occurring in Italy and loves to bring these crazy brews over. 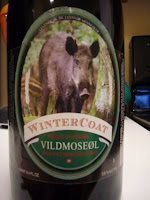 Made with peat-smoked malt, spicy bog myrtle and rowan berries, this beer is definitely smokey. Matthias noted that Wintercoat brewery has been criticized by beer geeks the world over for not being extreme enough; the brewery contends that they don't want to be extreme. To me, the smokey, juniper, vanilla and bitter roasted chocolate notes certainly make this beer far from ordinary.

I don't have a picture for this beer because it was an unlabeled bottle. However, the bright red wire cage gave it away for me. I have to confess, I love sour lambics and gueuzes; in a word, funk. Apparently, Matthias told Hanssens that he wanted a natural black currant lambic. And so, they produced 15 cases this past February. It is insanely delicious, very much on par with Hanssen's Kriek and Gueuze. Not too sour, but just right. 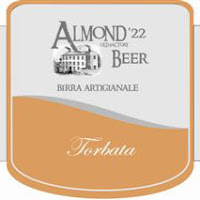 From a brewery 50 miles due east of Rome, this barleywine is brewed with barley malt (5% peat smoked), chestnut honey, organic orange peel, organic can sugar, and Kent Golding hops. This isn't the American barleywine, or for that matter, the English barleywine, you're used to drinking. The smokiness wins out, hiding the 8.7% ABV, and giving this beer a Scotch whiskey flavor. After this class, I'll certainly be able to identify peat smoked malt.

Brewed with star anise, this beer is reminiscent of many spicy winter beers. The idea behind this beer is perhaps more interesting than the beer itself. In the Alpine regions the Krampus is depicted as an incubus accompanying Saint Nicholas. On the evening of December 5th (Saint Nicholas eve), young men would dress up as the Krampus and roam the streets frightening small children with rusty chains and bells.

This brewery numbers each 50 case batch, making the odds of finding that particularly beer again nearly impossible. I often pass over this beer because of it's price point, running $30 a bottle retail. Called a dark ale brewed with Northern Brewer hops, orange and brown sugar, this beer is deep with notes of burnt coffee, espresso, orange zest and dark chocolate. 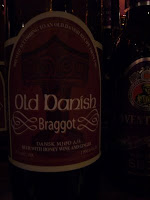 This beer was by far the most interesting of the night. A beermead! Genius! It would make Sam Calagione proud. Based upon an 18th century recipe, it's a blend of Old Danish Beer and Gl Dansk Mead. Apparently, the Vikings drank a similar brew at festive occasions as a special treat for kings.

Also an unmarked bottle, this beer was made at the request of Matthias. Saint Bon-Chien, named after the late brewery cat Bon-Chien, has a 10 or 11 barrel blending system. Matthias wanted a single cask brew; thus, they made a Pinot Noir version and a Bourbon barrel version. Brewed in May 2007 and bottled in September 2008, we sampled the Pinot Noir experiment. No surprise, this uncarbonated beer was mildly sour with fantastic red wine tannins. 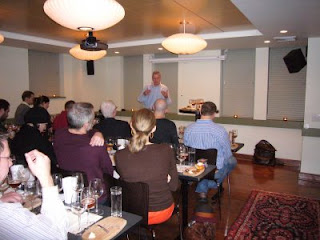 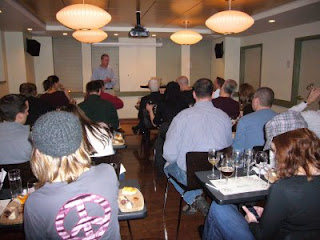 The class also involved some surprise treats. Matthias brought his new Schneider and Aventinus Chutneys (not yet available to the public) to be paired with each beer, respectively. In helping to create the recipes, he decided that he wanted some of each beer in the chutneys.

Mid-class, Matthias reached into his briefcase for some German criollo Chocolate to be paired with the Bøgedal Bryghus No. 127. We learned that criollo is the rarest and most expensive cocoa on the market. After searching for it online (since he said we can't find it), I eventually found the website for Heinemann Chocolatier, and guess what? There IS an English page, with Flash of course. And, if you're as obsessed with chocolate as I am, they ship to the US. 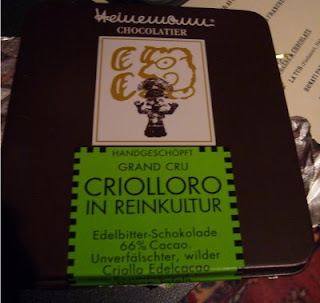 While I wouldn't mind becoming a brewer, or owning a beer bar, after this class, I'm convinced that being an importer is the way to go. All I have to do is learn French, German, Italian, Spanish...
Posted by Femme Fermental at 1:30 PM

The braggot is an ancient and worthy style... Are there any commercial braggots available in PA?

I don't believe so, but I did find this one in Maryland.