Saturday night I stopped by TJ's 5 year anniversary party. It was the usual beer event crowd: beer geeks and the girlfriends they bring along. (Okay, yes, some of them are there for the beer too.) I frequent TJ's fairly often; one can't always go to Teresa's Next Door, right? I enjoy TJ's because I can still get something to eat late, and find a decent beer to go with it.

TJ's had been building their "as advertised" draft list for the anniversary throughout the week. I may or may not have had something to do with Allagash Curieux and Allagash Musette kicking before the party started...

Regardless, the list was impressive. I enjoyed a Sly Fox TJ's 5 year anniversary British Pale Ale on the hand pump. Very delicious, mild, and well-balanced, with a nice amount of hops: a great session beer. I attempted to order a De Struise Tsjeesus, but it kicked on my pour. 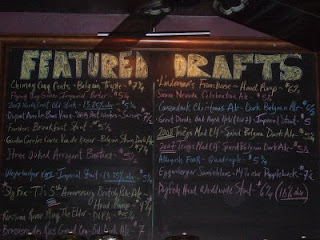 In lieu of Tsjeesus, I had a De Struise Black Albert. At one point in time, rather recently, Black Albert was very nearly the holy grail of beers for beer geeks. This 13% ABV Russian Imperial Stout was brewed exclusively for Ebeneezer's Pub in Lovell, ME. To get just a 2 oz taste of it at Ebeneezer's you almost need a secret password.

Following the advice of Beer Advocate, I was lucky enough to get a sample of this unlisted beer in July. It was a murky, brackish and chunky pour, from what I considered a rather old keg.

The bottle product, however, was delicious, and very similar, minus the stale factor. It pours silky black with a taupe head. It's medium-full bodied with flavors of roasted espresso and bittersweet chocolate and just a touch of that classic De Struise funk.

All in all, this beer made bearing the anniversary crowd worth it. 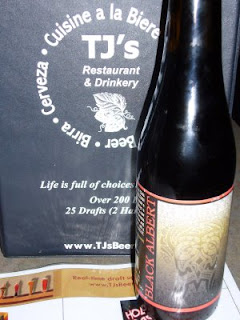 Posted by Femme Fermental at 9:40 AM