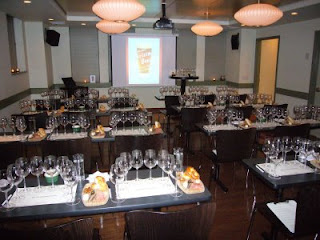 As he led us through 8 holiday beers, he touched upon various topics in his new book Wishing You A Very Merry Christmas Beer. I haven't quite finished browsing this book, but so far it seems to be a good reference for Christmas beers...er, I mean, the more marketable term holiday beers.

The highlights of the class are likely to show up in a segment on NPR's All Things Considered. They followed him to the happy hour at Tria before the class, and taped the entire class. If you hear a really nice pour soundbite, that was me. It'll be interesting to see how they piece it together; NPR wasn't giving up their angle. I'm especially curious to see how it turns out, as the interviewer seemed to have only recently learned a bit about beer. I talked to her after the class when she was tasting all of the beers she had just heard about for an hour and a half. 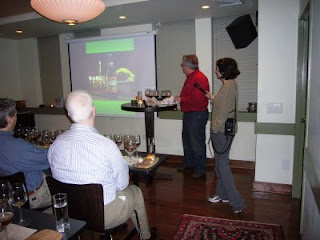 Speaking of beer....here's the line-up:
Highlights were Mikkeller Santa's Little Helper and De Struise Tsjeeses. I also have a growing appreciation for Dupont's Avec Les Bon Voeux. I certainly overlooked it last year in favor of other Belgian holiday beers like Gouden Carolus Noël and Corsendonk Christmas.

Sly Fox Christmas wins the award for beer I'd most like to have some holiday food with; rife with notes of clove, allspice, nutmeg, pumpkin and cinnamon, it would be awesome with a delicious seasonal dessert.

Perhaps the factoid of the night: St. Nicholas is the patron saint of brewers, lawyers and prostitutes. Funny how that makes sense.

Next Tuesday: Importer Matthias Neidhart of B.United International will lead a class at Tria on rare winter beers.
Posted by Femme Fermental at 3:13 PM