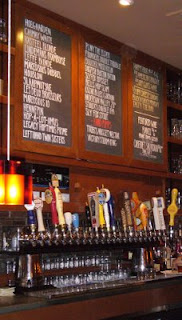 Sunday afternoon I stopped by Teresa's Next Door for their Double IPA Day Brunch. With 12 double IPAs on tap, it wasn't to be missed. And it seems as though dozens of others had the same idea as me; old friends and fellow beer blogger friends alike. 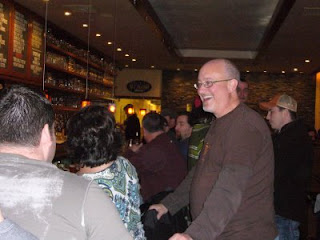 I arrived around 1:30, and got a seat at the bar pretty quickly. 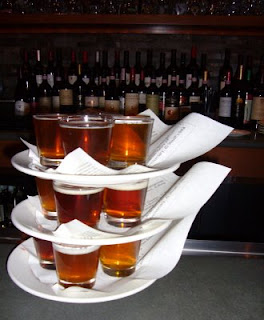 The tasting format was amenable: $10 for 4 tasting portions, 5oz each. Seeing as I was doing research, I ordered all 12 beers at the same time. If you have the ability to have 12 double IPAs side-by-side, why not do it and compare flavor profiles. Okay, maybe that's just the beer geek inside me talking. Either way, the beer geek in me won out.

Just a disclaimer: I did not drink all of these beers. I wouldn't be sitting here writing this blog if that were the case. I tasted all of them, finished just one, and gave the rest to my neighbors. 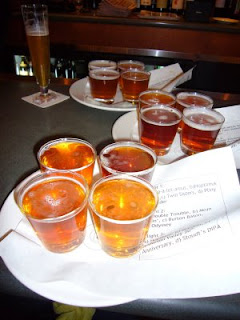 With only 3 of these beers new to me, there were some old favorites and some new surprises. Bells HopSlam was very nice, as always. Dogfish Burton Baton had some depth from the oak aging; there was definite vanilla and oak on the nose and palate. Anderson Valley 20th Anniversary also had some length, as it was brewed with 20 separate additions of Pacific Northwest hops.

The surprise of the afternoon was Riverhorse Hop-a-lot-amus; it is by far the best Riverhorse I've tasted to date. Founders Double Trouble, also new to me, was deliciously piney and resinous. It was the closest to my all-time favorite, Russian River Pliny the Elder. Yes, Russian River wins again. I promise I approached it with an open mind. I probably should have blind tasted, but I didn't think of that until now. 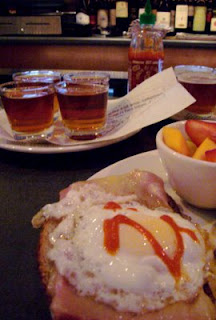 With all of these beers in front of me, I had to have some food. I ordered the "Morning Madame:" an open face croque monsieur, on sliced sourdough bread.

This pairing, plus sriracha, is my dream come true. I'm absolutely addicted to enjoying double IPAs with really, really spicy food. As the two strong flavors battle it out, they both become less strong; the hops calm down the spice.

All in all, it was a deliciously hoppy brunch.
Posted by Femme Fermental at 11:30 PM

I love that Morning Madame..mmm!