Okay, even though I've replaced bad with good, someone out there must get the reference.

Last Saturday night I had the pleasure of grabbing a late dinner at Zahav; the brainchild of Michael "Solo" Solomonov. Get the dorky reference now?

Zahav opened late April of 2008, with much local success and national attention. Solo, former sous chef at the original Striped Bass and Vetri, and chef at Marigold Kitchen, has quickly become one of Philadelphia's favorite star chefs. I have to give him credit; he found a gap in the area's restaurant scene. Philly foodies were prime for the entrance of a modern Isreali restaurant.

This was my second visit to Zahav. I fell in love the first time (not in a Vetri way), and couldn't wait to return. Finally, I got the chance.

While I went during Restaurant Week II, my lovely dining companion and I failed to order off the restaurant week menu. I just really wanted an entrée for two, and that wasn't part of restaurant week.

We ordered from the "Mesibah," party time, menu. At $48 a person, it's still an excellent deal. Here are the selections we enjoyed:

- Hummus-Tehina & Laffa - Their hummus is incredible. It's perhaps the best hummus I've ever had. Buying some at whole foods just won't cut it anymore. Not to mention that their made to order laffa more than satisfies all of my gluten cravings.

- Crispy Haloumi - Fried sheep's milk cheese. The last time I had this, it was great. However, this time, it came out a little too close to lukewarm. It seemed as though the food had been sitting for a while.

- Fried Cauliflower - While this dish was voted one of the 10 Best Restaurant Dishes of 2008 by Food & Wine Magazine, I was rather disappointed. Much like the Haloumi, it came out under temperature. However, lebaneh, a tangy dill yogurt sauce served with the cauliflower is a great accompaniment.

- Stuffed Baby Peppers - With Egyptian rice, walnuts and feta, these were also pretty unmemorable. They were a little bland, and served with the same lebeneh dipping sauce.

- Whole Roasted Lamb Shoulder - Served with a pomegranate-lamb jus and chickpeas, this was the reason I had returned to Zahav. As one of the thre 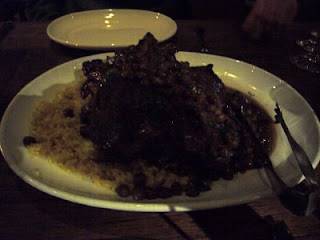 e, two-person entrée choices under the Mesibah, it did not disappoint. Beautiful and moist, it's far too much to eat. I did manage to take one picture during dinner. It incited a hilarious comment from the two women next to me. They whispered their loudest: "She takes picture of the food before she eats it!?" It's okay, you can talk to the strange girl photographing her dinner.

- Cashew "Baklava" - With white chocolate and Argan ice cream. I've learned that Argan is a species of tree indigenous to Morocco. Through a rather difficult process, Argan oil can be produced from the tree's fruit, and exported at a high cost. I loved this Baklava, it was perfectly moist and satisfying.

- Lemon-Poppy Upside-Down Cake - Sumac caramel, lemon curd and cucumber sorbet. Being familiar with poison Sumac, it's a little odd to eat Sumac. But it turns out that the fruit can be ground down into a powder, and is used frequently in Middle Eastern cuisine. This dessert was certainly creative, but not all that exciting. The cucumber sorbet was the best part.

- "New School" - Konafi chocolate, pistachio and labenah ice cream. I was intrigued by the idea of shaved phyllo dough. It ends up looking, and tasting, very much like shredded wheat. The labenah ice cream, produced from an Arabic thick creamy cheese, was well paired to help the dry phyllo dough texture along.

All in all, Zahav is worth multiple trips. I'm willing to attribute the kitchen's lack of execution to restaurant week malaise. It can't be that much fun turning out $35 meals for two weeks.

And so, Zahav fills a niche in the Philly dining scene. A niche that I can't imagine will have too much competition in the near future.