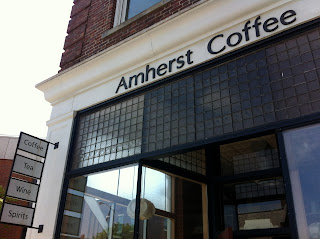 In "downtown" Amherst, there are several independent coffee shops, and a Starbucks. Everyone has their favorite; inevitably, this choice allows others to draw conclusions about your character. My favorite is Amherst Coffee. Admittedly, this coffee shop can be rather pretentious. Oh, and it is somewhat expensive. These are two things that I have been accused of being/being into.

The shop is frequented by professors, graduate students, a mass of Amherst College students, early-riser locals, and many young couples with toddlers. At the very least, I know I won't run into any of my undergrads.

The baristas are no nonsense. Their attitude cannot be defined as rude. Rather, they are disinterested. As long as they don't make me feel stupid for patronizing their expensive coffee shop, I can deal with neutral detachment.

This place is so popular that it's often impossible to find a seat (and a parking space). I believe Amherst could sustain at least 10 more coffee shops. In order to avoid the frustration of seatlessness, I developed a strategic study plan. 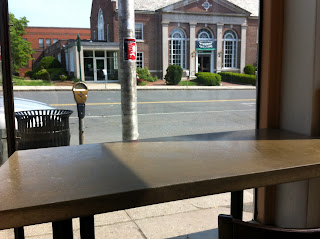 I started arriving at Amherst Coffee the moment it opens: 6:30 am (Monday - Saturday). While I was never alone, I was guaranteed the best spot in the place: a seat at the granite bar in the front window. The study space is expansive and no one can sit directly next to you. The seat looks onto the main intersection in town. In the winter, as the sun rises, this seat enjoys the best natural light (and warmth). 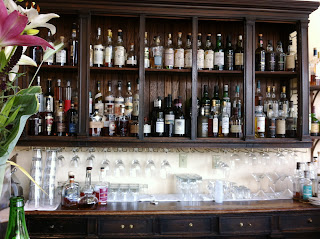 Also, Amherst Coffee has a full bar that opens at 3:00 pm. I gather it's called "Whisk(e)y Bar" because people continue to drink coffee and use their laptops at bar seats past 3:00 pm. The whiskey menu is extensive and the wine is cheap. While you can study late into the evening, the noise level of happiness peaks around 8:30 pm. At that time, it's best to join the somewhat pretentious crowd and order an alcoholic beverage, or call it a night.