"Beers of The Times" 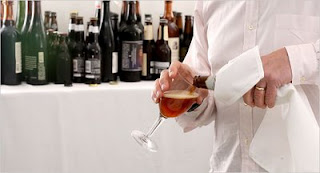 I must thank my friend Jess for diligently reading The New York Times (and other papers) everyday, and letting us all know about beer related articles. Sunday's article, "Roll out the Barrel, Open Your Wallet," in the Dining and Wine Section is just begging for a response. Well, maybe not, but I'm compelled to comment.

I love The New York Times, I really, really do. I am pleased that these beers are even on the nytimes' radar. After all, barrel aged beers are the wine snobs' most likely entrée into craft beer.

I'm curious to know all of the twenty-five beers that they blind-tasted. In background of the picture, I see J.W. Lee's, Allagash Curieux, and Captain Lawrence Smoke From the Oak. But where's Russian River Supplication, Temptation or Beatification, New Belgium La Folie and Lost Abbey Angel Share or Cuvee de Tomme? I have a hard time thinking they could have tasted them, and not ranked them pretty high.

I'm guessing they tasted 25 more easily purchased barrel aged beers. This somewhat misses the point, as the best barrel aged brews are the most difficult to find. They give us beer geeks something to dream about, driving miles and miles for, and to trade other rare beer for, on Beer Advocate.

In terms of what they did taste, I have to make a few points. I'm a little surprised that Abbaye de Saint Bon-Chien 2006 was their first choice. Granted, I haven't had it since last year, so maybe it's improved. I just had the Pennichuck Pozharnik Espresso Russian Imperial Stout on New Year's Day, and while yes, it was a delicious funky stout, I can't say I'd place it above Jolly Pumpkin's La Roja Amber Ale. Finally, Petrus Aged Pale (no, not Château Pétrus wine people, calm down) is a classic; it will always hold a special place in my beery heart as the perfect go-to slightly sour ale.

I guess I'd just like full disclosure. Maybe I'll send them an email, and ponder my own top 10 Barrel aged beers. I'm refraining from creating such a list because I'm in love with Russian River, and their beers would take up at least half the list.

Instead maybe I'll ponder the number of beers I've spent more than $35 a bottle on...
Posted by Femme Fermental at 5:24 PM