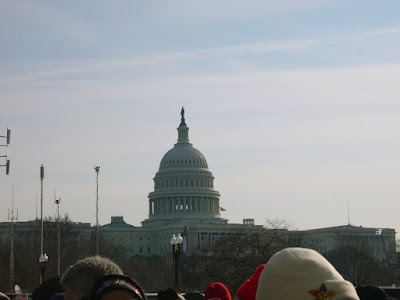 Okay, give a girl a break for one cliché on her birthday.

These past few days I was lucky enough to head down to DC for some inaugural/birthday fun. On election day in November, my best beer geek girlfriend, Jess, invited me to come down to DC for the inauguration, and my birthday, on January 20th. Being a beer geek and history dork, I could not resist.

Our first mission was to seek out Ommegang Obamagang. How could we not? 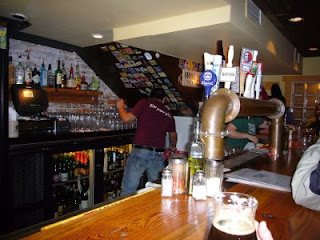 With 16 drafts, 1 hand pump and 80 bottled beers, this place seems very serious about it's beer. The feel was very suburban basement house party; add in some Georgetown yuppies, a few North Face jackets, a clueless couple ordering margaritas, and, well, you get the idea. 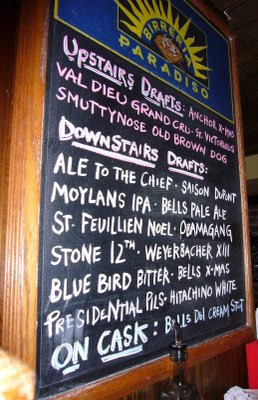 After a short wait for bar seats, we sat down to enjoy our Obamagangs. Poured into a tulip glass, it was deep mahogany with a light brown frothy head. Medium-bodied with notes of figs, raisins, chocolate and roasted coffee, it reminded me very much of Ommegang Chocolate Indulgence Stout (without the dried cocoa powder flavor). Overall, I was happy with the beer, and thought it was worth the hype.

Moving to the bottle list, we selected Brewer's Art Le Canard. Brewer's Art is a small production brewery with a cult-like following out of Baltimore, Maryland. Currently, they have a brewpub in Baltimore. However, their bottled beers are being brewed and bottled at Sly Fox, in Royersford, PA. 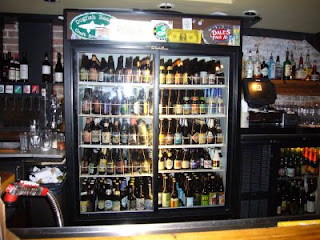 Since Brewer's Art pulled out of the PA market more than a year ago, my opportunities to sample their beers have been few and far between. Brewer's Art Resurrection, their dubbel, and Brewer's Art Ozzy Ale, a Belgian Strong Pale Ale, were formerly available on draft. They are both incredibly good Belgian-style ales. 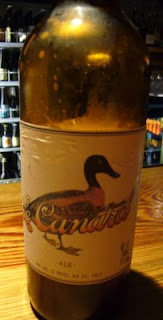 Le Canard, a Belgian Strong Pale Ale at 8% ABV, poured a medium copper hue. Medium-bodied, a fruity yeasty character with notes of apricots, apples, pears and citrus dominates the palate. The fruitiness is somewhat balanced by a nice bready malt backbone. Overall, it's a good Belgian-style ale by a small brewery.


As for Pizzeria Paradiso, I'd certainly make another trip. It had the best draft and bottle list that I found on my trip to DC. The pizza was, as always, excellent. The service and atmosphere left something to be desired, but I'm willing to put up with a lot for good beer.
Posted by Femme Fermental at 9:46 AM