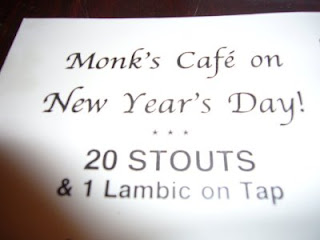 Having worked on New Year's Eve until 1am, I was very excited to go to Monk's on New Year's Day for 20 stouts and 1 delicious lambic. Only Tom Peter's would, or could, do something so awesomely rare and extreme.
Dr. Joel, my lovely dining companion and I arrived a little after 12:30, and the front bar was packed. Luckily, we grabbed a table, and had a quick brunch. We sampled the following:

Alright, beer geek confession time: Stouts have never been my thing. I know, I know, you don't have to tell me, I'm crazy. I must admit though, they are growing on me. (See Black Albert entry) It was refreshing to try them side-by-side. It allowed me to compare and contrast flavor profiles. I would have tried more, however, time was not on my side, and one very special beer at the back bar was calling my name. 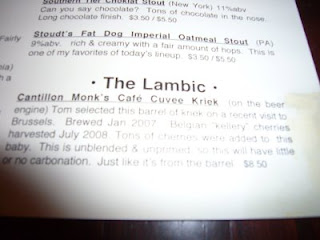 Back in late November, when Tom's Cantillon Monk's Café Cuvee Kriek was rumored to be coming into the country, I stopped by Monk's daily. Yes, I really did. I found out when the kegs got to the wholesaler, and when they had likely arrived at Monk's. On November 28th, they tapped the first keg, and I was there.

While I wasn't in love at first, it's growing on me. It's not that I didn't like it, I just wanted it to be more complex and more sour. Since Tom drinks it everyday (hey, I would too), we asked him if he had noticed any variances in the kegs. He said he didn't think so, but I think it's becoming more delicious. 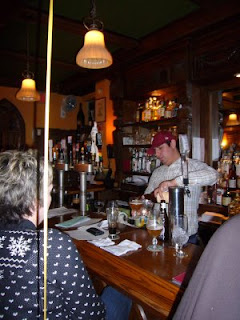 After several stouts, it was truly the perfect palate cleansing beer. Personally, I'm glad that Monk's has quite a few kegs left of this fantastic creation. I can't stop in without having one, or two, or... 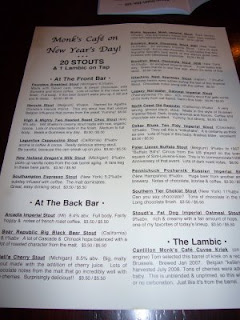 Cheers!
And here's to a Beery Happy New Year!
Posted by Femme Fermental at 12:13 PM