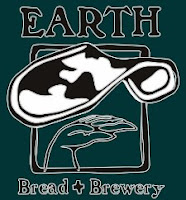 Tonight at Tria Washington Square, Tom Baker of Earth Bread + Brewery will be taking his beers outside of his new brewpub.

Some of you may remember Tom Baker from his old Heavyweight Brewery Co. Seems as though he's made the switch from brewing big and bold beer to those of a more session beer weight. "Not that there's anything wrong with that"; there's a place for session beers, and there's certainly a place out there in beer world for reviving old styles.

If ancient beer styles are something you're curious about, I highly recommend Sacred and Herbal Healing Beers: The Secrets of Ancient Fermentation by Stephen Harrod Buhner. The book includes some good historical information, and a ton of recipes for you homebrewers.

Tom will be hanging out at Tria for happy hour prior to teaching a Fermentation School class at 6:30. I was just on Tria's website, and two tickets are still available.

It was before 5 so they weren't serving food yet either, but I heard they're opening for lunches by Feb.