Yes, Folks, I'm moving away from my beloved hometown city for the next few years. As my mini-biography indicates, my life has been a precarious mix of education, bartending and all things fermentable. Since graduating from college 3 years ago I've played a little juggling game. At the height of it, I ended up opening and managing a restaurant in Wayne while finishing a Master's Degree at NYU.

Since commuting to Massachusetts isn't a possibility, I'll be giving up my bartending gig at Tria in September, and moving to Amherst to pursue a Ph. D. in history at UMass. Have no fear, my passion for, and pursuit of, all things beer, wine and food related will not end; it will just be relocated, and interspersed with trips back to Philly. 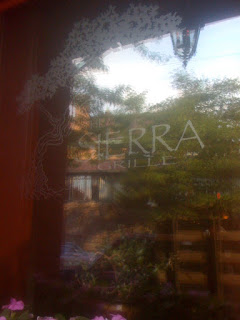 Last week, I went up to Amherst to find a place to live. Naturally, I had to include some food and beer. With the help of Beer Advocate and Yelp I picked a restaurant that alleged to have the best combination of food and beer in the area. So, after securing a great place to live, my parents and I stopped at The Sierra Grille in Northampton. 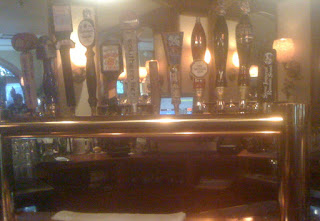 To start, Beer Advocate didn't lie. The beer selection was great. With 21 taps, one hand pump and an okay sized bottle list, I wasn't disappointed. The list was about 75% import, 25% domestic and managed to cover most major styles.

I started out with a local draft beer: Berkshire Brewing Company Steel Rail Extra Pale Ale. Berkshire Brewing Company, started in 1994, is a craft brewery located in South Deerfield, MA. As their website says, they brew in 620 gallon batches and can brew 420 barrels (13020 gallons) a week. According to the brewery, Steel Rail, their flagship beer, is "a full flavored American style ale." While the beer had good balance between hops and malts, it lacked some body. It's citrus hop character was enjoyable, but not quite complex. I'm curious to try more of their beers and perhaps make a visit to the brewery. Based on BA, it seems like they might have some interesting one-off beers to try out. 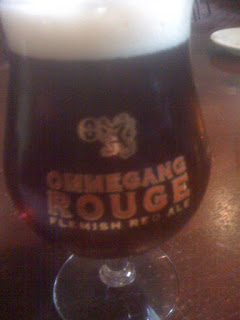 After the BBC, I moved onto Ommegang Rouge, a Flanders Red from Brewery Ommegang in Cooperstown, NY. Since it's debut this past fall, I've been a big fan of this beer. I love, love, love sours and was impressed to find such a great American rendition. Say what you will about Duvel-Moortgat and Don Feinberg's exit from Ommegang (and I'm often the first one to jump in when Duvel comes up), but this is a great beer. It's tart, sour, refreshing, crisp and beautifully complex. 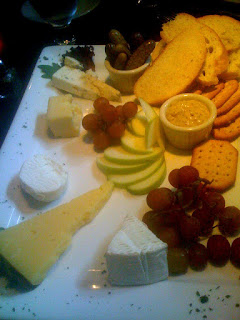 Moving to food, there was much to be desired. I realize I live in a fantastic foodie city. My standards for great meals have been set by the likes of Bryan Sikora, Jose Garces and Marc Vetri. So, this dinner was alright. I sound incredibly snobby in saying this, but dinner was just okay. I know that I'll find a few culinary gems in Western Massachusetts, this just wasn't one of them.

However, their cheese plate was great to see. Featuring 5 regionally local cheeses for 18 dollars, this cheese plate was the highlight of the meal. The plate included Great Hill Blue from Marion, MA, Shelburne Farms 24 mo. aged Cheddar from Shelburne, VT, Cobb Hill Ascutneg Mt. Gryere from Hartland, VT, Westfield Farms Camembert from Hubbardston, MA, and Vermont Butter & Cheese Chevre from Websterville, VT. Yes, it was a great all-American cheese plate. There's something to be said for fresh, local cheese.

All in all, not a bad place for cheese and beer. And for me, that's often all I need.

Shame you are moving. Just ran into you again at Amada. Philly will miss you........Brian

Good luck with your advanced degree pursuit in lovely Amherst, MA. Come back to teach history in one of the Philly area's many good colleges or your alma mater and, equally important, resume your blog about Philadelphia's restaurant and beer scene.
While Bernard Shaw had a point about Hegel's dictum ("Hegel was right when he said that we learn from history that man can never learn anything from history"), women can!