Yesterday I went to what is now officially Philly Magazine's Best New Restaurant 2009: Distrito. I made my first visit right after Craig LaBan's 3-Bell review last September. My 10 month lapse between visits might indicate that I was less than excited about the place. It just didn't quite live up to the hype. The food was alright, but, yes, as everyone likes to say, "It just wasn't as good as Amada."

I owed a "frequent" Tria guest a visit to their place of work, so I decided to trek over to West Philly for some "modern Mexican cuisine." Turns out, it was also University City Dining Days. The menu I had hoped for was abbreviated into a $30 prix fixe. I decided to go à la carte anyway. 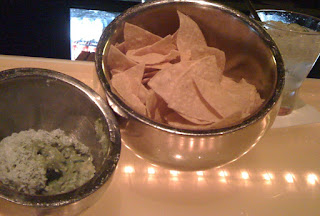 After being sent out guacamole with chips, I went with gazpacho - watermelon, tomato, red chile, crab, cucumber. While the cool watermelon flavor, enhanced with just a touch of spice was fantastic, the completely pureed texture wasn't what I expected. The crab and cilantro wasn't enough to give this soup the perfect textural experience. 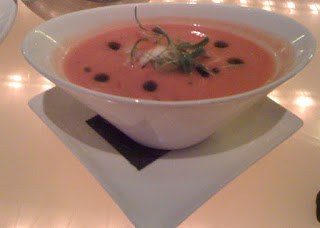 Next, I went with a salad: jícama, honeydew, watermelon, chile piquin, lime zest. The finely diced ingredients were perfectly chilled and crisp. Seeing as it was hot and humid yesterday, this was actually exactly what I wanted to cool down. In fact, both the soup and the salad were weather appropriate food choices. 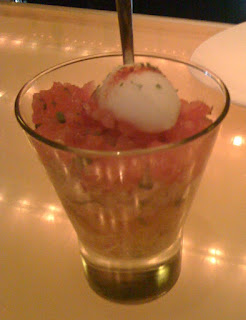 Apparently, I ended up dining vegetarian; obviously not something I normally do. Last time I visited, the bone marrow tacos were the highlight. Unfortunately, they're not even on the menu anymore.

I realize I did some lame ordering. I didn't choose their most exciting items, and I didn't even get tacos. But, I wasn't that hungry and the weather wasn't exactly pushing me towards hot dishes.

In the end, I'd go to Distrito again. And do some better ordering.