Yesterday, my day off eating tour began at the newly reopened Oyster House. I work just down the street, yet somehow hadn't stopped in yet. Naturally, in the mood for decadence, I went with the classic pairing of oysters and bubbly. Really, sometimes, there's just nothing better in the world. 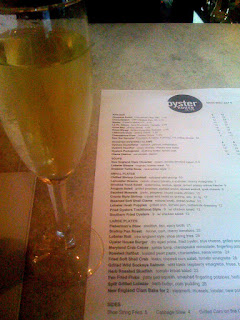 I started out with a glass of Paras Balta Cava Brut from Penedes, Spain to go with my half dozen Royal Miyagi oysters from British Columbia. The oysters were incredible. They were really creamy with a somewhat fruity/salty aftertaste.

I have to give the Oyster House credit; they were the best shucked oysters I've had in Philly. I really do take issue with restaurants that want to serve oysters for between two and three dollars a piece, yet do a terrible job of cleaning them. I'm willing to deal with a little grit, but if the oyster isn't even separated from the shell, I have to draw the line. So, kudos to the Oyster House. I suppose, based upon their name, they really couldn't get away with anything less. 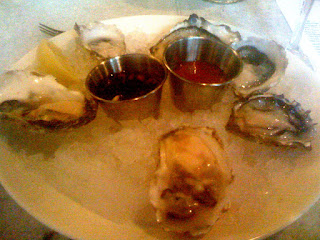 After the oysters, I moved onto a glass of Bouvet Brut Rosé from the Loire. To somewhat pair with the rosé, I went with a version of my favorite Tria dish: Roasted Beets with Feta. At Tria, the beets are roasted with red onion, honey, and lemon. In comparison, the beets at Oyster House were much less sweet. They were also unevenly roasted and covered in parsley. The Feta was also pretty low quality. Between the pervasive parsley flavor and the boring feta, these beets really didn't match up to Tria. I may be a little biased, but really, I don't want parsley on my beets. 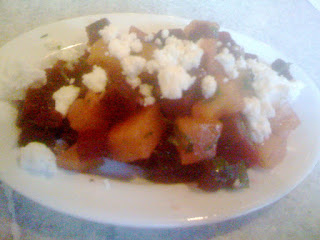 So, I guess I should just stick with oysters at Oyster House. And, well, there's nothing wrong with that.

I have to agree with you on the oyster quality. The veteran shuckers do a great job and are fun to watch.

But beets at the Oyster House? Really? It may just be me, but looking over the menu in your photograph I would have chosen every one of the listed small plates or sides before I settled on beets! I have been there a number of times for lunch now, and the salads and small seafood dishes are really good (except the one time my belly clams were really over-fired - ugh).

I'll give you the benefit of the doubt and assume that since you work down the street that you will return for a better meal.

Cava is from Penedes, Catalunya, not Rias Baiaxas.

To the first, I just went with beets because I'm personally obsessed with them. I typically eat three orders a day when working at Tria. It was just a personal preference to try them out, and compare them to a dish less than three blocks down the street. I'd like to try them out for real food.

To the second, you're completely correct. I knew it seemed strange, and that's what I get for trusting a restaurant's menu. Thanks!

I was pretty surprised to see the cava error on the menu at Oyster House. They also spelled the name of the winery wrong!