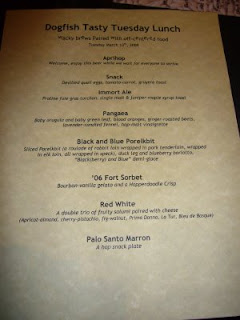 As beer week rolls on, I was finally able to enjoy a day of beer events not involving work. I planned my double header of events about a month ago, and each was awesome in their own way. 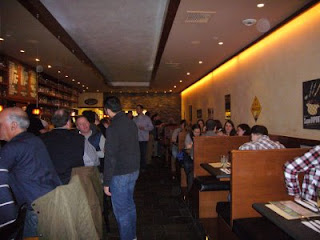 During the first half of my day I had the pleasure of attending the Dogfish Head lunch with Sam Calagione at Teresa's Next Door. Apparently beer geeks are very willing to take off work to attended a beer luncheon with ex-Calvin Klein model Sam and his crazy high-alcohol brews. 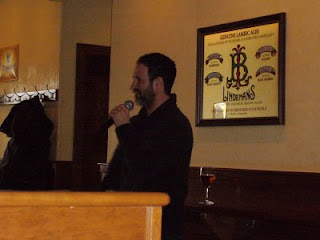 The kitchen at Teresa's Next Door, ever irreverent, creative, and delicious, set the tone for the lunch right on their menu: "Wacky brews paired with off-centered food."

We began with Dogfish Aprihop paired with a "Snack" plate of Deviled Quail Eggs, Tomato-Carrot Soup and Gruyere Toast. The quail egg was deliciously cute and adorable; the addition of whole grain mustard in the yoke mixture added the perfect zing. 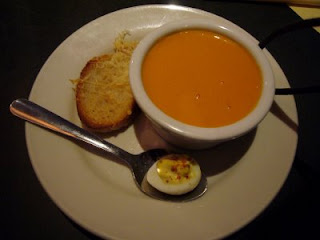 Next Dogfish Immort Ale, a beer brewed with peat-smoked barley, organic juniper berries, vanilla & maple syrup and aged on oak and fermented with a blend of English & Belgian yeasts, was paired with a Praline Foie Gras Torchon and single malt & juniper-maple syrup toast. All I have to say is Foie Candy. Melt in your mouth candy. This course was by far my favorite. What other beer dinner have you been to with foie? Really?! It actually paired well with the Immort Ale, as the juniper berries, vanilla and maple syrup, in both the beer and the dish, mirrored one another. 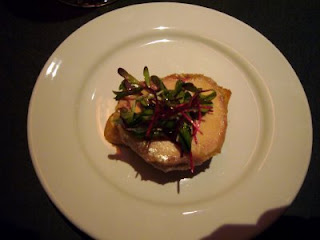 Third course brought Dogfish Pangaea paired with a Baby Arugula, Blood Orange, Ginger-Roasted Beet Salad with lavender-candied fennel, and a hop-malt vinaigrette. Pangaea, brewed with an ingredient from every continent is especially heavy on the crystallized ginger from Australia. The ginger flavor in the beer paired well with the lightly gingered beets. Additionally, the acidity of the blood oranges balanced nicely with the sweetness in the lavender fennel. 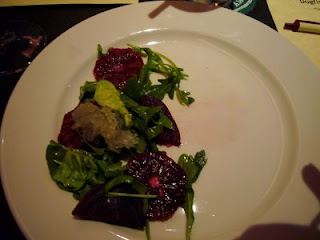 Fourth course was a TND original, Dogfish Black and Blue paired with Porelkbit. Yes, pork, elk and rabbit all in one carnivorous feast. Technically, it is a roulade of rabbit loin wrapped in pork tenderloin, wrapped in elk loin, all wrapped in speck. Served with "barlotto," (beer barley risotto) and a blackberry and blueberry demi-glace, this dish paired nicely with the Black and Blue, a Belgian-style strong ale fermented with blackberries and blueberries. 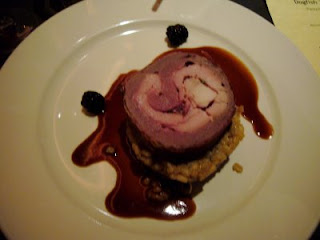 Beginning our three dessert courses was the '06 Fort Sorbet with bourbon-vanilla gelato and a Hopperdoodle crisp made by yours truly. Baking with green hop butter sure was interesting...two batches later. The sorbet itself was created with bottles of '06 Fort, and let's just say that after being cooked down, the 18% ABV was still evident. 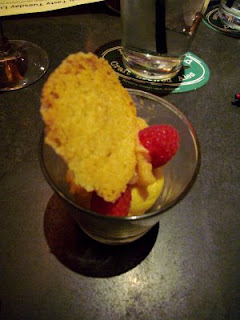 Next Dogfish Red and White was paired with a double trio of House-made Fruity Salumi and Cheese. The three salumis, apricot-almond, cherry-pistachio, and fig-walnut were paired with Prima Donna, La Tur and Bleu de Basque. I'm a huge fan of the salumis, the fig-walnut being my favorite. The Red and White, a belgian-style Wit brewed with coriander and orange peel and fermented with Pinot Noir juice, and then aged in Pinot Noir barrels and on oak staves, was drinking very nicely. Though, like a good wine, it could certainly age longer. 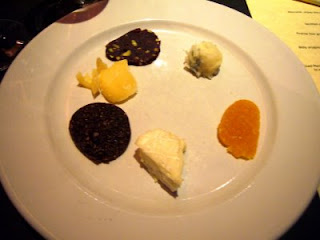 Finally, Dogfish Palo Santo Marron was paired with a Hop Snack Plate. The plate included a hop brownie, pine-nut hop brittle, and a hopmellow. You have to love the creativity on this one. Who knew hops could also be part of delicious desserts? The Palo Santo Marron, a brown ale aged in handmade Paraguayan Palo Santo wooden tanks, was a nice 12% ABV port-like finish to the meal. 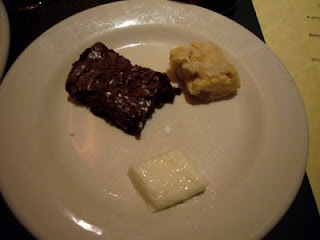 All in all, it was perhaps the best beer pairing event I've attended. The food was very, very well thought out and creative. While these beers were all high in alcohol and flavor, they did not overpower the food. Neither the beer, nor the food took center stage. It was rather the epitome of complementary pairings; wacky beer met wacky food...and it was delicious.
Posted by Femme Fermental at 11:36 PM