From Brooklyn to Barcelona: An Evening of Tapas & Beer with Jose Garces and Garrett Oliver 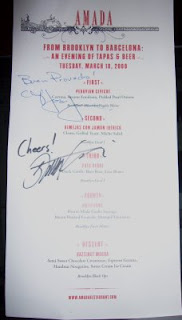 Yesterday, my day was not over after the Dogfish Lunch at Teresa's. Although, it could have been. My friends and I continued on our day to a beer dinner at Amada with Jose Garces and Garrett Oliver of Brooklyn Brewery. 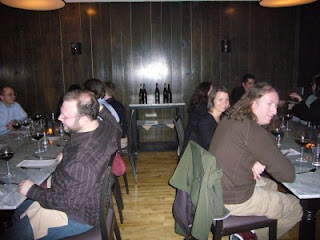 The format of the dinner was pretty awesome. It was 9 people each, at two tables, with one of the hosts at the head of each table. Half way through the meal, Jose and Garrett switched tables so we could talk to both of them. I've met Garrett before; about two years ago I attended a Tria Fermentation School class on beer and cheese pairings. And, we all know I'm a huge fan of Jose.

Jose's ceviches are always on point. They are perfectly balanced and acidic, and the fish is always wonderful tasting. As far as the beer goes, it was a one year old bottle of a collaboration beer between Schneider and Brooklyn. A year ago I wasn't a huge fan of the beer. However, after a year of bottle aging, the hops had mellowed nicely and it showed as a perfect food beer. 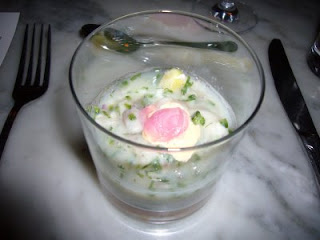 This dish was also very nice. The sauce itself ended up being a Brooklyn Local 1, Jamon and butter sauce. I had a few sandy clams, but on the whole, the flavors were there. The Brooklyn Local 1, a Belgian Strong Pale Ale, pairs very nicely with food, generally speaking. It doesn't overpower and provides a nice cleansing, refreshing effect. 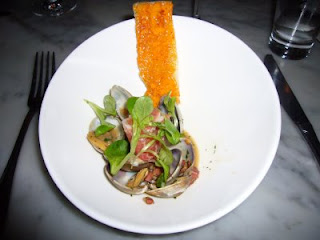 This dish was the highlight of the dinner. The duck, as you can see, was cooked to perfection. The beer rice, cooked with Brooklyn Local 2, cilantro, and probably some tomatillos, was incredible; the flavors were so developed and rich.

The beer, a just-released Belgian-inspired strong dark ale, was very tasty. I've heard some mixed reviews this week about the beer, but I personally enjoyed it. The Belgian dark candi sugar component is very prominent and it's full of dark fruit flavors. If I were to blind taste it, I would place it somewhere between a double and quad. At 9% ABV it's not quite a quad, but the flavor components are similar to a quad. 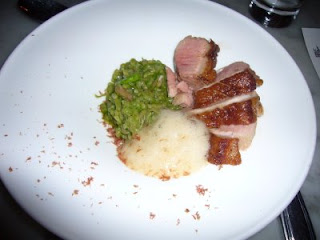 Moving to a Catalonia dish, this house-made sausage, produced over at Tinto (as Jose said: the guys at Tinto do all the charcuterie), was incredible. It was so flavorful, fennel and garlic were most prominent. The mustard emulsion was a nice addition and who doesn't love bacon added to their bitter greens?

The beer itself, as Garrett said: "Doesn't exist, and you never had it." Well, I'm still going to write about it because it was pretty cool. For Brooklyn's venture into barrel aging (Black Ops), they acquired 9 Woodford Reserve barrels and ended up only needing 6 of them. So, they took Brooklyn Brown Ale and aged it for 9 months in the bourbon barrels. Brewed in July 2007, and refermented in the bottle, this beer is about 1 year 8 months old. The bourbon was very prominent, both on the nose and on the palate. It seemed a rather successful venture. This leads me to believe that a barrel aged series might be in the works. 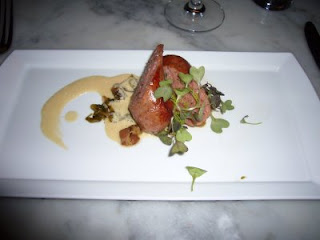 I'm a big sweets girl, so this dessert was awesome. The hazelnut nougatine might have been the best dessert component (my hopperdoodle aside), that I've had in a while. The espresso granita was somewhat lost in the mocha creameux, but it was still a wholly delicious dessert.

The beer, a new and hard to find release (940 cases released), is a Russian Imperial Stout aged in Woodford Reserve barrels for about 4 months. It was similar to the Dark Matter, however it was stronger in alcohol. Again, the bourbon was very prominent, and more so than in the Dark Matter. This is likely because Black Ops is much younger; it was only brewed in June. 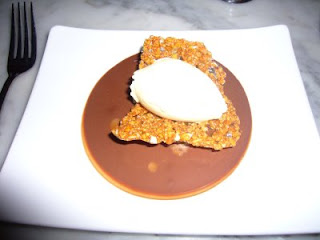 Overall, this dinner was very, very cool. I actually was able to talk to Jose Garces! Yup, the foodie in me is giddy! Having met Garrett before, I was really excited to meet Jose. I adore his food, as you may have gathered, and he was a genuinely nice guy. Amada holds a special place in my foodie heart; it was the first chef's tasting menu I ever had. I have to especially thank Amada for hosting the dinner.

After two 5 course meals in one day, I was certainly ready for bed...and yet, ready for beer week to continue...
Posted by Femme Fermental at 11:47 PM